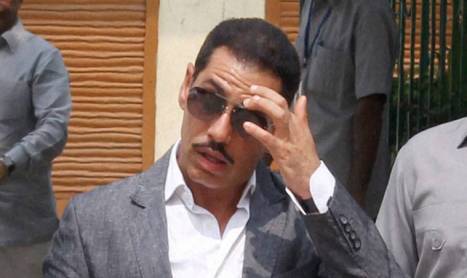 Chandigarh: In what may come as a major setback for Congress president Sonia Gandhi’s son-in-law Robert Vadra, the BJP Government in Haryana has appointed a one-man Commission of Inquiry to probe the issues concerning the grant of licenses for developing commercial colonies by the Department of Town and Country Planning to some entities in Sector 83, Gurgaon.

An official spokesman of the state government said that the Commission would also probe their subsequent transfer or disposal, allegations of private enrichment, ineligibility of beneficiaries under the rules, and other connected matters.

Issues concerning public importance related to the grant of licenses and alleged illegalities have come to the notice of the state government.

The Commission will submit its report to the state government as soon as possible, but not later than six months from the date of its first sitting.

The Commission shall make an inquiry and give its findings and recommendations with respect to the following matters, namely: – the circumstances under which license(s) for development of commercial colonies were granted to some entities in sector 83, Gurgaon; whether the said entities were eligible for grant of license(s) as per the applicable laws, rules, circulars, notifications, guidelines etc. prevalent in the state of Haryana including in the Department of Town and Country Planning, Haryana; whether the transfer of licenses by the original licencee within a short period of time to other entities was violative of law, rules, circulars, notifications and/or guidelines etc.; and whether the Town and Country Planning Department had contemplated the transactions that had taken place before or after the grant of license, particularly with reference to the loss of revenue to government; to recommend measure(s) which may be adopted to meet the ends of justice, particularly with a view to take corrective action to prevent loss of revenue to the public exchequer and also prevention of undue private enrichment at the cost of the public exchequer in such cases in the future; to consider such other matters, including, complaints given by different individuals, magazines, political parties and also the Comptroller and Auditor General reports etc. on the subject; to give findings and recommendations to meet the ends of justice, particularly relating to allegations of criminal conspiracy, criminal misconduct and undue private enrichment, if any and the role of public servants and private individuals therein; and to recommend remedial measures, for systemic improvement, with a view to prevent loss of revenue to the public exchequer and undue private enrichment in future.