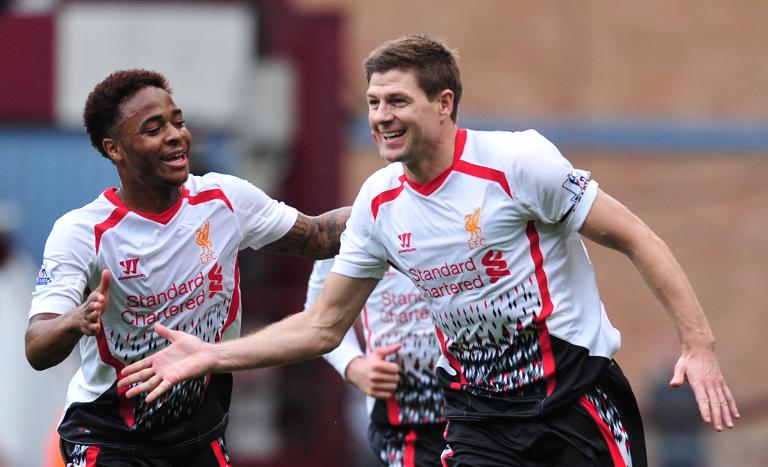 Liverpool captain Steven Gerrard has urged Raheem Sterling to sign a new contract with the club as he prepares to make an emotional final bow at his beloved Anfield.

Gerrard will play the last home game of his 17-year senior career on Saturday against Crystal Palace before he joins Major League Soccer outfit LA Galaxy when the season ends.

And speaking at a farewell press conference at Liverpool’s Melwood training ground on Thursday, Gerrard implored talented forward Sterling to put pen to paper on a new deal with the Reds at the conclusion of the campaign.

Sterlingâ€™s future has come under scrutiny ever since he shelved contract negotiations in March and the 20-year-old revealed in an interview that he rejected Liverpool’s offer of a new five-year deal worth Â£100,000 ($157,480, 138,567 euros) a week.

Gerrard, 34, himself came close to leaving the Merseysiders for Chelsea only to remain with his boyhood club, and he believes Sterlingâ€™s development as a player will be enhanced under Liverpool manager Brendan Rodgers.

“I think he should sign a new deal here. It would be the best for his career,” Gerrard said.

“Thatâ€™s something I can’t control but the young lads here have got no better manager to learn off because Brendan Rodgers is a fantastic man-manager, he puts a lot of time and effort into every individual player in the squad.

“My advice to Raheem is, where he is at now with his age, he needs a manager who believes in him, who is going to play him, to coach him. I think there is no one better for him than Brendan.

“The danger for younger players is they want it all too soon, they chase it, and go to another club and just become a number. They donâ€™t get that attention, love or care.â€

The outgoing Liverpool skipper, who is set to play his final game for the club away to Stoke City on May 24, will end his last season at Anfield without another medal in his collection.

However, the clubâ€™s supporters will still celebrate the career of one their most revered players.

Liverpool-born Gerrard acknowledged his final match at Anfield is one he had not been looking forward to, but that he would attempt to keep his emotions in check as he prepared to wave goodbye to the Kop.

“I donâ€™t know what itâ€™s going to be like come the end of the game,” said the midfielder.

â€œItâ€™s the chance to say goodbye for real. I have been dreading this moment at the end of the game in a strange way because I am going to miss it so much, playing at Anfield in front of the fans, with my team-mates,” the former England skipper added.

“I look back at it with pride, really proud of what I have achieved here, all the trophies I have won and the great memories Iâ€™ve had. It will be emotional, the plan is to stay strong and try to avoid the tears.”

Gerarrd has already been touted as a future Liverpool manager, although he maintains he would only ever return to the Merseyside club in that capacity if he felt he was up to the job.

“I have got ambitions to stay in the game. I am taking my UEFA coaching badges and looking to progress up that ladder,” he explained.

“To take a role at this club, you have to be good enough. You canâ€™t take one on reputation or name.

“The demands and expectation here are so high you would be naive to take one just because you are Steven Gerrard or because youâ€™ve had a good career on the pitch.

“If in a couple of yearsâ€™ time, when Iâ€™ve been out of the city for a bit, if there is a role on offer where I think I can contribute and be good enough, I will certainly consider it.

“I’ve been coming to this club since the age of eight and I do feel I can contribute in a role in the future.”