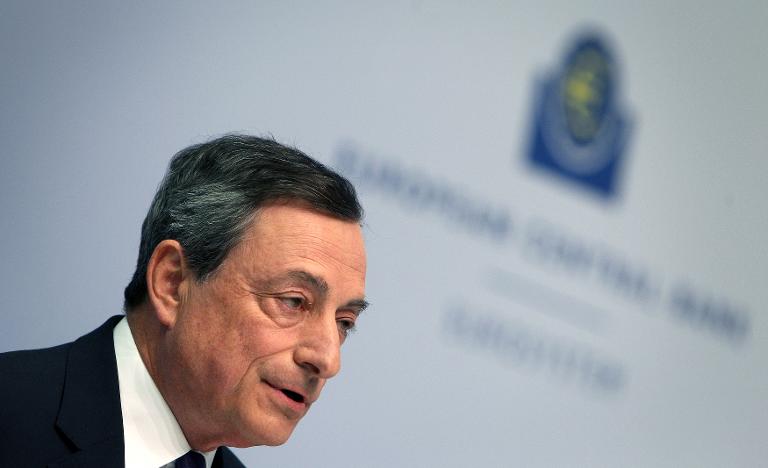 European Central Bank President Mario Draghi said Thursday that the bank’s massive stimulus for the eurozone will remain in force “as long as needed” to stabilize prices.

Draghi, in a speech at an International Monetary Fund forum, outlined the steps the ECB has taken to achieve its mandate of medium-term price stability as the eurozone slipped into weak growth and deflationary risks rose.

With the economy and inflation recently picking up, there has been speculation that the ECB would wind up early its unprecedented 1.1 trillion euro ($1.3 trillion) asset-purchase program.

The ECB has said the quantitative easing, launched in March at a pace of 60 billion euros a month, would last at least through September 2016, and Draghi reaffirmed that commitment.

“After almost seven years of a debilitating sequence of crises, firms and households are very hesitant to take on economic risk,” Draghi said.

“For this reason quite some time is needed before we can declare success, and our monetary policy stimulus will stay in place as long as needed for its objective to be fully achieved on a truly sustained basis,” he said.

Draghi said that major easing measures undertaken since June 2014, including low interest rates and long-term refinancing operations for banks to ease credit, have already produced a “substantial effect” on some areas of the 19-nation economy.

“Both the inflation and growth outlook have improved considerably and consumer confidence is now on the rise,” he said.

But, he said, “what ultimately matters is that we see an equivalent effect on investment, consumption and inflation. To that effect, we will implement in full our purchase program as announced and, in any case, until we see a sustained adjustment in the path of inflation.”

“For pensioners, and for those saving ahead of retirement, low interest rates may not be an inducement to bring consumption forward. They may on the contrary become an inducement to save more, to compensate for a slower rate of accumulation of pension assets.”

This spending weakness is evident in the United States, where the Federal Reserve has kept its key rate pegged near zero for more than six years to promote recovery from the Great Recession and is planning to raise it this year.

A windfall from falling gasoline prices, putting more cash in Americans’ pockets, has failed to boost consumer spending, which accounts for about two-thirds of US economic growth.

“What’s up with the consumer? It’s puzzling,” the head of the Atlanta Fed, Dennis Lockhart, said last week.

“The recent sharp decline in gasoline prices, which was reflected in the jump in consumer attitudes, should have bolstered spending growth. Instead, we saw a sharp, nearly full-percentage-point increase in the personal savings rate in the first quarter, from 4.6 percent to 5.5 percent.”

That level of US savings was the highest since late 1992.