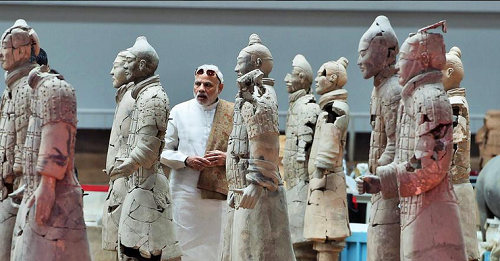 Xi’an:Â Prime Minister Narendra Modi on Thursday visited the famous Terracotta Warriors Museum which has a large collection of sculptures depicting the armies of Qin Shi Huang, the first Emperor of China.Â

Modi visited the museum this morning after arriving here to a grand welcome on a three-day trip during which he will also visit Beijing and Shanghai.Â

The Prime Minister spent about an hour going around the museum. He also enquired about the excavation work being undertaken there.Â

In the visitors book, Modi wrote that he was “deeply impressed” by the extraordinary care with which the museum has been preserved.Â

The visit to the museum was Modi’s first official engagement in Shaanxi province’s Xi’an, an ancient city steeped in Chinese and Buddhist culture.Â

The mausoleum of Qin, being the tomb of the first emperor who unified the country, is the largest in Chinese history.Â

The mausoleum is associated with an event of universal significance, the first unification of the Chinese territory by a centralised state created by an absolute monarch in 221 BC.Â

Qin was also the first in China to construct a mausoleum city, to build coffin chambers and subordinate palaces in the mausoleum.Â

The first emperor also started the ritual of building chambers for those buried alive with the owner of the tomb on a large scale.Â

The terracotta sculptures are a form of funerary art buried with the emperor, the purpose of which was to protect the emperor in his afterlife.Â

Scientists estimate that there are about 8,000 warriors in three different pits and many of those warriors remain buried underground, besides 130 chariots, 520 horses and 150 cavalry horses. The figures vary in height according to their roles, with the tallest being the generals and also include warriors chariots and horses.Â

Other terracotta non-military figures are also found in pits and they include officials, acrobats, strongmen and musicians.Â

Scientists believe that it took about 700,000 workers to build this army.