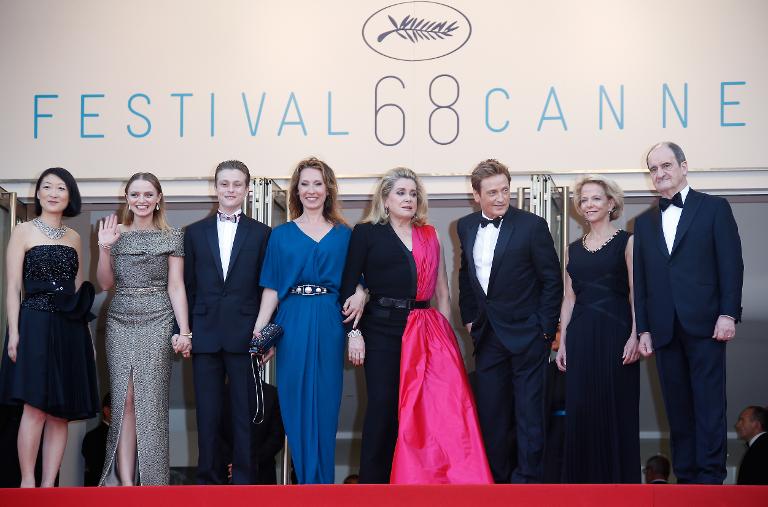 The Cannes Film Festival opened on Wednesday with a star-studded gala premiere of gritty French drama “Standing Tall” — only the second time a female director has taken the first night slot.

Its iconic French star Catherine Deneuve made her way down the red carpet on the French Riviera in a black and magenta evening gown, joined by fellow actresses Naomi Watts, Julianne Moore and Natalie Portman.

US director siblings Joel and Ethan Coen are charged with leading this year’s jury as they select from 19 entries for the coveted Palme d’Or award.

“Standing Tall” director Emmanuelle Bercot became the first woman since 1987 to open the world’s most famous film festival, which in its 68th edition is showing a greater female focus.

The tough drama also marks a change from the normally star-studded openers of past years, such as “Moulin Rouge!”, “Robin Hood” or “The Fifth Element”.

“To choose this film for the opening of the festival is a response to a difficult year in Europe, especially in France,” Deneuve said at the press conference earlier in the day.

On Thursday, the festival’s big blockbuster, “Mad Max: Fury Road”, will screen — and that, too, puts a woman (Charlize Theron) at the centre of the action.

“The lead of this movie is a female amputee,” its other star, Tom Hardy, told a small gathering of journalists on Wednesday. “It’s a total empowerment of women. It’s actually about fucking time.”

Shot in the desert of Namibia and featuring spectacular effects and imagery — and a seat-shaking soundtrack — the blockbuster imagines a dystopian future world peopled with decadent, savage groups scrabbling to control sparse supplies of water and fuel.

Theron said she was “really proud” to be the main focus in an action film, but not just because she was a woman.

“If there’s something really bad-ass about it, it’s not that she’s a woman and she’s fighting on par with the men, it’s that she’s an amputee and she’s figured out a way to survive and not have that hold her back,” the South African-born actress said.

– ‘No discrimination’ in France –

“Standing Tall” represents the other end of the movie spectrum, a low-budget drama that follows a young delinquent through a cycle of petty crime and juvenile homes.

Bercot rejected the importance of her gender, saying “it’s the selection of the film that’s an honour”.

“I don’t at all feel like a minority. At least in France, female directors cannot honestly say they don’t have a place or that they suffer discrimination. I know it’s different in other countries,” she added.

The screen portrayal of women will be raised again this week, with the screening of US film “Carol”, about a lesbian relationship in New York in the 1950s.

That movie’s star, Australian Oscar-winning actress Cate Blanchett, told Variety that films with women at the centre were still “tricky to finance”.

“There are a lot of people labouring under the misapprehension that people don’t want to see them, which isn’t true,” she said.

Later in the festival, Oscar winner Natalie Portman will present a special out-of-competition screening of her directorial debut “A Tale of Love and Darkness” about the early years of Israel.

– Thrilled to be first –

Gyllenhaal joked he had been glad to get the call for jury duty because he was “thrilled to see films before anyone else… and for free!”

The panel will judge a typically eclectic selection that includes Matthew McConaughey in “The Sea of Trees”, and Michael Fassbender risking the cursed role of Macbeth.

Among the highlights appearing outside the competition are Woody Allen’s latest, “Irrational Man”, and a new Pixar animation called “Inside Out”.

The festival is also the biggest film industry get-together of the year, with about 12,000 delegates from 116 countries expected to attend, hawking their movies and closing deals.