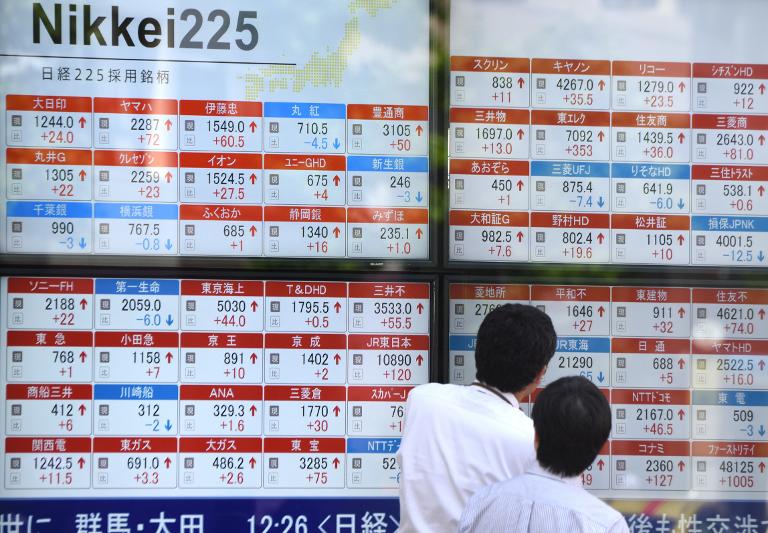 Asian markets mostly retreated on Thursday following another set of below-forecast US data, with Tokyo taking the biggest hit as the yen advanced against the dollar.

However, the euro added to recent gains after data showing the eurozone economy picking up trumped worries about Greece’s ongoing debt reform talks.

Tokyo slipped 0.55 percent by the break and Sydney fell 0.75 percent while Hong Kong was 0.10 percent lower and Shanghai shed 0.56 percent, but Seoul was up 0.18 percent.

US traders were left disappointed Wednesday after the Commerce Department said retail sales, a key part of consumer spending that drives most of the US economy, stagnated in April after rising 1.1 percent in March. The average consensus estimate was for a 0.2 percent increase.

The news adds to unease about the world’s biggest economy, which grew slower than expected in the first quarter, and makes a Federal Reserve interest rate rise unlikely in the early summer, as had been expected at the start of the year.

“While US growth is rebounding, it may not rebound as far and as fast as many investors had expected,” Russ Koesterich, global chief investment strategist at New York-based BlackRock Inc., told Bloomberg TV.

On currency markets the dollar softened as the chances of a rate hike abated. In early Japanese trade it bought 119.15 yen against 119.16 yen in New York but was well down from 119.83 yen in earlier Wednesday in Asia.

The euro pushed on after official data showed eurozone economy met expectations and grew 0.4 percent quarter-on-quarter in January-March, up from 0.3 percent in the previous three months.

The expansion came after getting some help from the European Central Bank’s massive bond-buying programme, launched in March to kickstart the single-currency bloc.

However, traders are keeping a close watch on talks between Greece and its creditors as they try to hammer out an overhaul of the country’s bailout terms that will unlock billions of euros in much-needed cash to pay its bills.

There are fears that if it defaults on its debt repayments it could fall out of the eurozone, which would have painful knock-on effects globally.

Oil prices were lower. US benchmark West Texas Intermediate for June delivery fell 34 cents to $60.16 while Brent crude for June eased 25 cents to $66.56.