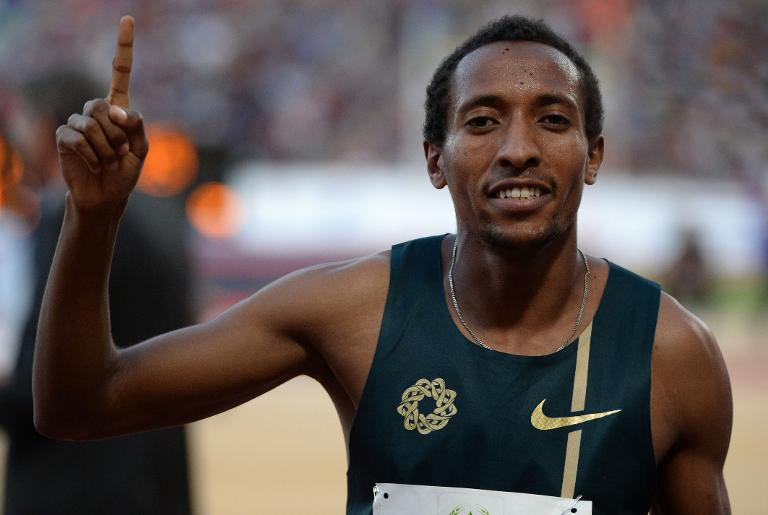 Mohammed Aman and Asbel Kiprop, the men’s current 800m and 1500m world champions, race each other in Doha Friday as a stellar field gathers for the 2015 Diamond League opener.

The pair’s race is among a number of highlights in a meet which has attracted some of the sport’s biggest names, including controversial US sprinter Justin Gatlin, Britain’s double Olympian Mo Farah and America’s 200m Olympic champion Allyson Felix, who will be seeking an 11th victory in Qatar.

Even the late withdrawal through injury this week of French pole vault world record holder Renaud Lavillenie has failed to dampen expectations over the athletics season’s curtain-raiser.

Ethiopia’s Aman and Kenya’s Kiprop clash in the 800m, the distance which the former is currently the world champion, both indoors and outdoors.

But it is the 21-year-old’s first race of the season and although he won at the same meet in Qatar last year, he is likely to come under pressure from Kiprop, the current 1500m world champion who won over 800m in Doha in 2011.

Local interest in this race will come in the shape of Qatar’s Musaeb Abdulrahman Balla, who won the Arab Championships title in April.

Another middle-distance highlight is the Doha debut of Farah.

The Briton, the current world, Olympic and European champion at 5,000m and 10,000m said on Twitter that he was “good to go” on Friday and has been pictured enjoying himself on a Doha beach.

But he has been warned he will be challenged by Kenya’s Isaiah Kiplangat, who was reported as saying earlier this week: “I will see where I belong at the Doha meeting.

“The season is starting and every athlete wants to win. But I have to see how I fare on with the best and that is why it is important to put in my best against Farah.”

In the men’s 100m, Gatlin will try to continue the exceptional form he showed last season.

The resurgent American won all of his fifteen 100m races last year and set the world’s fastest time over the distance in 2014, clocking 9.77 seconds.

The 33-year-old, who has seen out a four-year doping ban, looks already to be in good form in 2015, having been part of a victorious US team at the World Relays earlier this month.

Among those he will be up against is a teammate from the relays, Michael Rodgers, Britain’s European champion James Dasaolu and the veteran sprinter from St Kitts & Nevis, Kim Collins.

In the women’s events, Felix will be seeking a third 200m Doha victory to go with her three over 100m and five at 400m in Qatar.

“It’s no secret I love competing in Doha,” she said on Twitter earlier on Wednesday.

Another athlete making a Doha debut is the 400m Olympic champion Sanya Richards-Ross, who unlike many of the athletes who are just starting out their 2015 season, has already shown she is in top form.

Last weekend, at the Jamaica Invitational, she ran 49.95 at 400m, the best time so far this year.

“I’d really like to win the Diamond League trophy this season,” she said earlier this week. “Everyone that follows me knows I love diamonds so it’s only right!”