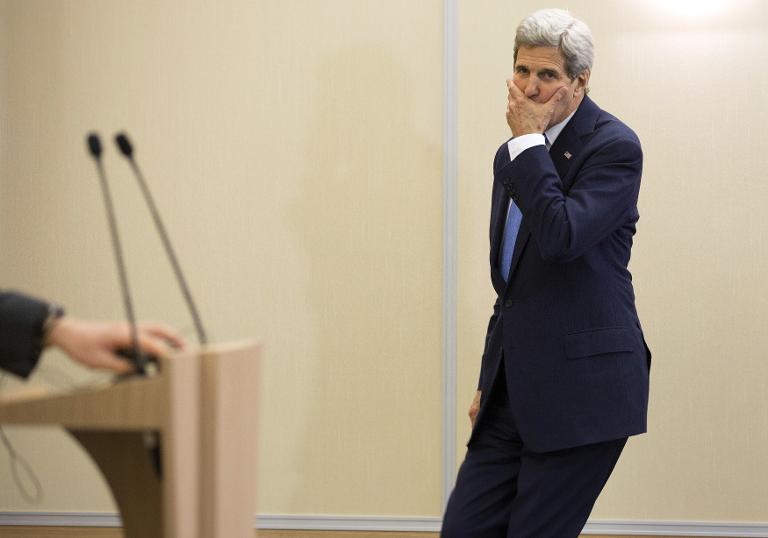 Russia and the United States vowed to improve strained ties after “frank” talks between President Vladimir Putin and top US diplomat John Kerry, but there was no concrete breakthrough after eight hours of meetings.

Kerry’s trip to the Black Sea resort of Sochi was the highest level US visit to Russia since the Ukraine crisis erupted in late 2013.

And while there were no tangible agreements, there was a marked change in the tone between the two long-time wary foes who for months have traded barbs and accusations.

“Today’s meetings allowed us to better understand each other,” Russian Foreign Minister Sergei Lavrov told reporters after meeting Kerry for four hours to discuss Ukraine, Syria and Iran, among other issues.

A post on Kerry’s Twitter account called the meeting with Putin “frank” and “productive” before he headed to Turkey for key talks with NATO foreign ministers on Wednesday.

“There is no substitute for talking directly to key decision makers, particularly during a period that is as complex and fast-moving as this is,” Kerry said after separate talks with Putin which also lasted four hours.

He and Lavrov both pledged at a joint press conference that Moscow and Washington would continue dialogue to try to resolve their differences.

Ties between Moscow and Washington were shredded when Russia seized the southern Ukrainian peninsula of Crimea in early 2014 and allegedly buttressed separatists in eastern Ukraine.

Kerry visited Sochi after President Barack Obama snubbed Russia’s huge military parade to commemorate the 70th anniversary of the Soviet victory over Nazi Germany last week, in what was seen as punishment over Russia’s meddling in Ukraine.

Earlier in the day, Kerry and Lavrov laid wreaths at a World War II memorial to pay tribute to the Soviet dead.

Washington and Moscow have sharply disagreed over the crisis in Ukraine, and both men conceded differences remained.

But Kerry reiterated that biting US and EU sanctions on Russia could be rolled back “if and when” the terms of a shaky Ukraine ceasefire were fully met.

He warned all sides, including in a rare rebuke Ukraine’s pro-Western government, that any further recourse to force would “be extremely destructive”.

Both Kerry and Lavrov said all the terms of the truce had to be implemented.

While there were “certain contradictions and divergences as regards to the origins” of the conflict in eastern Ukraine, “we definitely shared the view that it is only possible to resolve” the crisis by implementing the truce, Lavrov said.

The Ukraine crisis is also likely to top the agenda at NATO foreign ministers’ talks on Wednesday in Antalya, Turkey.

Kerry arrived in the Turkish resort early Wednesday, flying straight from his meetings in Sochi.

Beyond Ukraine, Kerry said when they worked together the United States and Russia could achieve important goals.

Pointing to the success of an earlier deal on eliminating Syria’s chemical weapons, Kerry said: “There is an urgent need, we agreed, for that same kind of cooperation … the same kind of effort is now necessary on some other challenges that we face together.”

“We have an understanding of the need to avoid steps which can inflict long-term damage on bilateral ties in various fields,” Lavrov said.

On Syria, Kerry said the two countries had agreed to share more information about continuing chlorine gas attacks by the regime of Syrian President Bashar al-Assad, which have raised alarm in Washington.

US officials said Kerry wanted to gauge whether Moscow’s support for Assad may also be on the wane as the rebels appear to be gaining the upper hand in the four-year civil war.

They also discussed Yemen and Libya, and Kerry briefed Putin on the negotiations on curtailing Iran’s nuclear programme, saying it was important to maintain their unity on the issue.

Putin’s top foreign policy adviser Yury Ushakov told Russian reporters the Sochi meetings were “the manifestation of the first signs of understanding that the two great countries should return to normal cooperation.”

At the same time Moscow stressed it would not renounce its national interests, with the Russian foreign ministry saying it was ready to cooperate with Washington on an “equal basis, without attempts to dictate and coerce.”