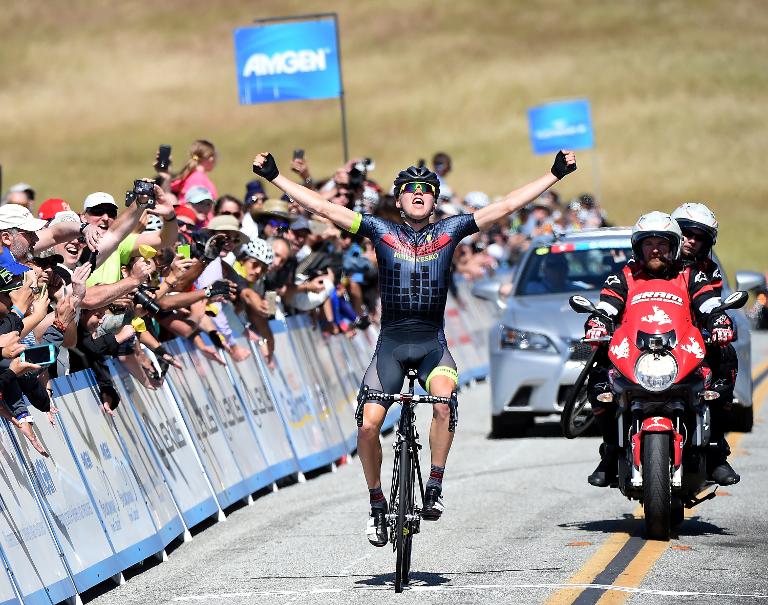 Toms Skujins overcame a minor crash and a strong uphill headwind on the final climb of the day en route to winning the third stage of the Tour of California on Tuesday.

The 23-year-old Latvian (Hincapie Racing) earned the biggest win of his career over the 170 kilometer (105 mile) stage around San Jose and will now pull on the yellow leader’s jersey for Wednesday’s fourth stage.

“The last half hour was pure pain,” Skujins said.

Canada’s Rob Britton (Team SmartStop) is 11 seconds back of Sagan in third place.

Skujins hit the wall while cutting through a strong headwind in the last kilometer of the final steep climb up Metcalf Road to the finish.

He was able to put distance between himself and the peloton earlier by throwing caution to the wind on a series of descents that also proved risky.

It led to a minor crash while coming off the Quimby climb but he was able to recover quickly and ride away.

“In the headwinds I was just dying,” he said. “It is easier to win solo because then you don’t have to sprint. I had nothing left.”

Skujins made his move on the biggest climb of the stage, a category one ascent of Mount Hamilton. He was able to break free of a four-man pack and build a lead of 1:30.

Despite the tumble coming off Quimby he managed to stretch his lead to just over three minutes and then extended that to four minutes with 16 kilometers to go.

The peloton made one final attack with just under two kilometers remaining but Skujins was too far in front.

The key stages for the overall are expected to be the stage six, a 24-kilometer time trial at Big Bear Lake and a gruelling out-of-category climb to the Mount Baldy finish line the next day.

Sunday’s 105-kilometer eighth and final stage from downtown Los Angeles to the Rose Bowl stadium in Pasadena should end with another sprint finish.