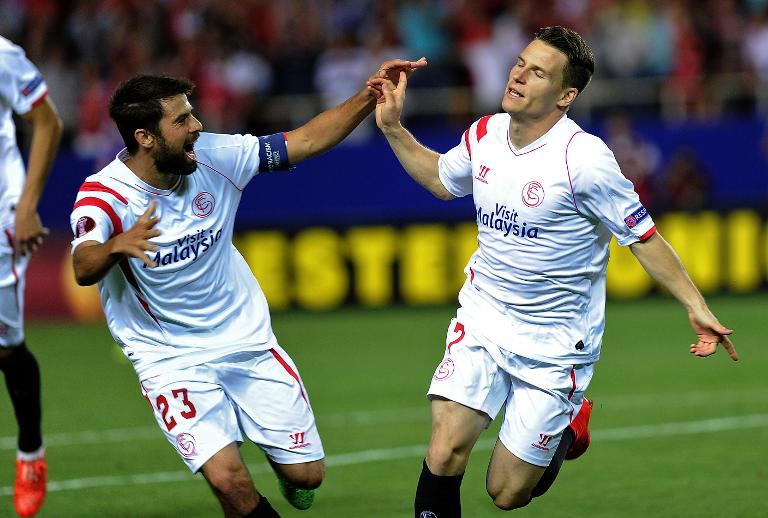 Holders Sevilla are on the brink of a return to the Europa League final as they take a 3-0 lead to Italy for the second leg of their semi-final against Fiorentina on Thursday.

It would take a remarkable turnaround in Florence for Unai Emery’s side to miss out on reaching the final again as they look to retain the trophy they won by defeating Benfica on penalties in Turin 12 months ago.

A brace by Aleix Vidal and a Kevin Gameiro strike last week have the Spanish side in control and Sevilla are a team in form too, having lost just once in 18 games in all competitions, with that loss coming at the hands of Real Madrid 10 days ago.

Currently fifth in La Liga with two games left, three points adrift of Valencia in the fourth and final Champions League qualifying berth, winning the Europa League may be their more likely route into the continent’s elite club competition for next season.

Emery named goalkeeper Beto, who has been on the sidelines with a shoulder problem, in a squad of 22 for the match at the Stadio Artemio Franchi, where Sevilla right-back Coke is expecting the hosts to throw the kitchen sink at them.

“It is going to be a long 90 minutes. Despite beating them 3-0, Fiore played very well in the first half and had two or three clear chances,” Coke told the Sevilla website.

Winners of the competition in successive years in 2006 and 2007 in its former guise as the UEFA Cup, Sevilla are attempting to become the first club to lift the trophy four times.

“These are historic moments for the club, in your professional career. This competition means a lot to us and you can see the results we have been getting,” added Coke.

Fiorentina, who are fifth in Serie A, must do what they have never done in Europe to overturn a 3-0 first-leg deficit if they are to keep alive their chances of reaching the final in Warsaw and winning a European trophy for the first time since the 1961 Cup Winners’ Cup.

“I think the team did not deserve such a heavy defeat,” Viola coach Vincenzo Montella said of the first leg.

“On Thursday we will above all need great inner belief, the fans pushing us on and a bit of luck. It is my duty to transmit my belief to the team. It will be a huge task, but I believe we can do it against Sevilla.”

The prospect of an all-Italian final appears slim, with Napoli also having work to do if they are to progress past Dnipro of Ukraine.

The sides played out a 1-1 draw at the San Paolo last week, with Yevhen Seleznyov snatching an away goal for Dnipro after David Lopez had given the 1989 UEFA Cup winners the advantage.

While Napoli coach Rafa Benitez is seeking to win the trophy for the third time after previous triumphs with Valencia and Chelsea, Dnipro are aiming to reach a first European final.

The path has not been easy for them — Myron Markevych’s side have already played 17 games in Europe this season with their continental campaign beginning with a 2-0 defeat to FC Copenhagen in the Champions League third qualifying round in August.

They will ‘host’ Napoli in Kiev, which is 450 kilometres further away from the conflict in eastern Ukraine than Dnipropetrovsk.

Nevertheless, Seleznyov is hoping Dnipro can emulate the performance of compatriots Shakhtar Donetsk, who won the UEFA Cup in 2009.

Seleznyov, who was on the books at Shakhtar six years ago but did not play in their 2-1 final victory over Werder Bremen, told UEFA.com: “I didn’t appreciate the importance of that triumph for the city of Donetsk and for Shakhtar.

“Winning a European trophy was very significant back then â€“- and that’s still the case.”

Tie level at 1-1 after first leg