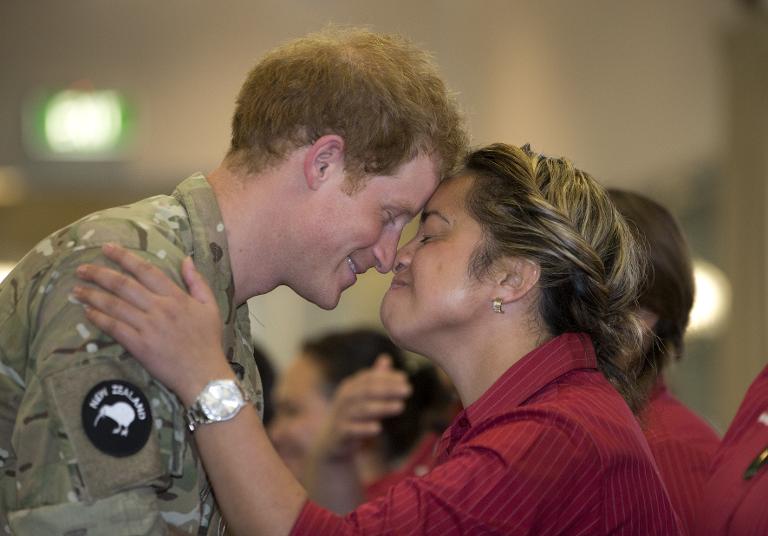 Britain’s Prince Harry performed a fearsome Maori war dance, or haka, and mingled with tattooed ex-convicts on his trip to New Zealand on Wednesday.

Red-faced and sweating with exertion, the fifth in line to the throne participated in a chest-thumping, foot-stomping haka alongside about 30 soldiers at the Linton army camp north of Wellington.

He had just 20 minutes to learn the dance before performing it publicly, with his instructor Warrant Officer Brett Pene praising the royal’s efforts.

“Given the time restraints in trying to teach him, it was a bit difficult trying to learn the actions and the words, so I think he did really well,” he told reporters.

“He was sweating, we were sweating, a bit of frustration set in. He was keen, that was the main thing.”

The Maori haka is a traditional challenge, the most famous of which “Ka Mate” is regularly performed by the All Blacks rugby team.

Harry performed the New Zealand’s army’s own haka “Ngati Tumatauenga”, or “Tribe of War”, which honours fallen comrades and past campaigns.

Pene said it was “humbling” to have the prince perform the Army’s haka, given the royal visitor’s own military background which has included two tours of Afghanistan.

While at the base, Harry also met a Maori performing arts group, greeting each member individually with a “hongi”, or nose-pressing welcome.

He clambered aboard an armoured car and took an all-terrain vehicle for a spin, although his passenger, Staff Sergeant Jason Edgecomb, joked the prince was reluctant to drive over a patch of freshly mown grass.

“There was a bit of a British [reserve], not used to walking on the grass, not allowed on the grass,” he said.

Prince Harry wrapped up his visit to the camp with a game of touch rugby with schoolchildren.

Earlier, the 30-year-old began the fifth day of his New Zealand tour at the Odyssey House addiction treatment centre in Christchurch.

While there, he met Zeb King who told the prince he was in prison just three months ago and showed him a drawing he had made of his son Ty.

He is due to visit Whanganui, in the country’s north, on Thursday, and take a river trip in a Maori waka, or canoe.

The prince’s trip to New Zealand follows a month-long secondment to the Australian army during which he received bush survival lessons and camped in the outback.