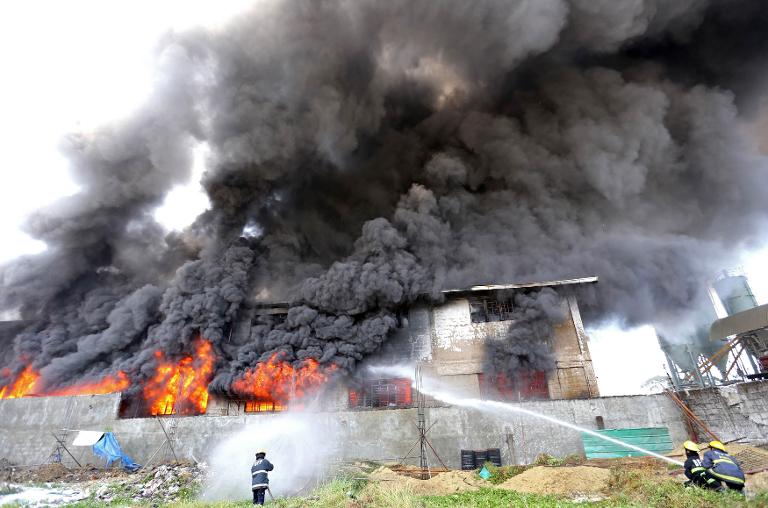 At least 28 people were killed and dozens more feared dead after a fire tore through a factory producing flip-flops in the Philippine capital Manila on Wednesday, the city’s fire marshal said.

Firemen said they counted 28 bodies but were only able to retrieve three due to fallen debris blocking their path in the gutted building more than 12 hours after the blaze, which began before noon (0400 GMT).

“They were lying side by side, but all I could see were their bones,” Manila’s fire marshal, Senior Superintendent Sergio Soriano, told AFP.

Rex Gatchalian, mayor of the industrial suburb of Valenzuela where the blaze occurred, told AFP before the death toll was announced that 67 workers were unaccounted for.

Factory guard Mervin Ardes, one of the survivors, told AFP “more than 50” people were at work at the time of the disaster.

The fire sent a huge column of black smoke above the metropolis of 14 million people.

“I’m hoping against hope that they’re still alive,” Gatchalian said of the missing.

He told wailing relatives outside the burning factory earlier that none of those trapped inside had survived the fire.

Security guard Ardes said “more than 50” employees had punched in their time cards at his post by the gate earlier Wednesday before they began work.

“It happened so fast that few people were able to escape,” he said, adding workers downstairs who were blocked by flames and smoke also fled upstairs where the bodies were later seen.

Fire engines lined the street outside as night fell, even as policemen set up a perimeter around the blackened building.

The reek of foul-smelling chemicals hung in the air as powerful spotlights illuminated the policemen and firefighters on the streets.

City officials drew up an official list of potential victims from the accounts of relatives who said they had yet to locate family members who were on duty at the factory at the time the blaze struck.

“Someone told us no one escaped from the area where she was assigned” to pack flip-flops into bags, Neverio told AFP.

“My sister’s workplace was near the chemicals. She was not able to get out because the flames had spread,” Neverio added.

Injured survivor Emma Santa Agata told ABS-CBN television many of her fellow workers were trapped at their work stations on the second floor.

“My boss and I were running out when we were blocked by fire and smoke,” Santa Agata said.

“There was a sudden explosion and he got hit on the arm,” said the woman, whose hair was singed according to the network.

District fire marshal Senior Superintendent Rico Kwantiu said they were still waiting for the arrival of powerful cutting tools to slice through fallen steel trusses before they could remove the bodies and properly count them.

The company, Kentex Manufacturing, had made flip-flop slippers for the local market, using brand names like “Havana”, company employees said.

Huge and sometimes deadly fires at sprawling slums as well as factories are a common occurrence in the Philippine capital, where fire safety regulations are sometimes willfully disregarded.

In one of Manila’s deadliest-ever fires, 162 people were killed and 94 others injured at a disco in 1996.

Last year, 18 years after the blaze, two shareholders of the club and seven city building safety inspectors were sentenced to prison terms of up to 10 years for allowing the nightclub to operate without adequate safety precautions.