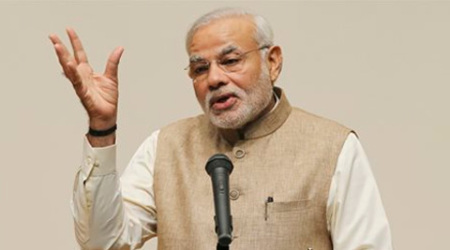 New Delhi:Â Prime Minister Narendra Modi on Wednesday night termed as a “historic milestone” the passage in Parliament of the black money bill that aims to squeeze illicit accounts and transactions abroad and said it indicates the “priority” of the government.Â

“Passing of Black Money Bill (by Parliament) is a historic milestone. Personally, I am very delighted. It indicates the priority we attach to the issue,” he tweeted.Â

The ‘Black Money (Undisclosed Foreign Income and Assets) and Imposition of Tax Bill, 2015’ was approved by Rajya Sabha on Wednesday, two days after the Lok Sabha passed it.Â

The Bill, which seeks to unearth unaccounted funds and assets stashed by Indians abroad and provide for 120% tax and penalty in addition to 10-year jail term, will become law after getting assent of the President.Â

The government has also armed itself to attach domestic property of equivalent value of such offenders.Â

Dealing with the menace of black money was one of the main poll promises of Modi in the last Lok Sabha elections.