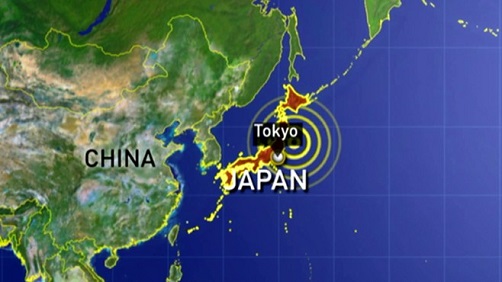 Tokyo: The earthquake epidemic is spreading.

A strong 6.8-magnitude earthquake struck off the coast of northeastern Japan, earlyÂ on Wednesday, but authorities did not issue a tsunami warning and there were no immediate reports of damage.

The quake struck atÂ 6:12 amÂ off the east coast of Japan’s Honshu island in the Pacific Ocean at a depth of 38.9 kilometres (24.1 miles), according to the United States Geological Survey.

Japan’s meteorological agency said there was no immediate tsunami threat from the quake, but urged residents to stay on alert, as the risk of landslides had increased.

The quake hit 33 kilometres southeast of the nearest city of Ofunato.

Large areas jolted by the latest tremor were among those damaged by the 2011 quake and tsunami that killed more than 18,000 people and triggered a nuclear meltdown at the Fukushima power plant.

“We believe the latest earthquake was an aftershock from the 2011 tremor,â€ said Yohei Hasegawa from the Japanese meteorological agency. â€œThe 2011 quake was such a huge tremor that its aftershocks are still continuing,” he told a press conference.

He warned that another strong tremor could hit in the coming week, adding “if it happens in the sea, it could trigger a tsunami”.

Wednesday’sÂ quake did not damage any of the nuclear reactors in the region, including those at the crippled Fukushima facility. All of Japan’s reactors have been offline since the Fukushima disaster.

Train services in the region, including “Shinkansen” bullet trains, resumed operations after a temporary suspension.

Japan’s islands are situated at the juncture of several tectonic plates and experience a number of relatively violent quakes every year.

But building codes are rigorous and regular disaster drills are held, helping to ensure that despite their frequency and magnitude, quakes usually pass without loss of life or significant damage to property in Japan.