Home Politics No photos of netas except Prez PM & CJI in govt ads:... 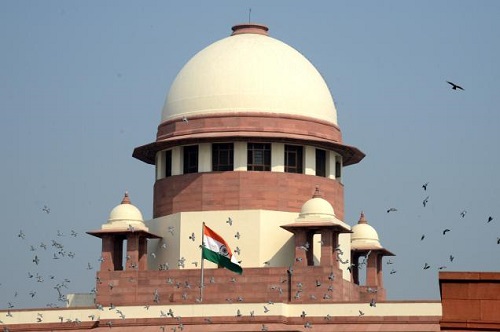 New Delhi: In a historic judgement, the Supreme CourtÂ on WednesdayÂ issued a slew of guidelines on regulation of public advertisements and said that they can carry pictures of certain dignitaries like the President, Prime Minister and the Chief Justice of India.

A bench headed by Justice Ranjan Gogoi rejected the plea of the central government that judiciary should not tread into the territory of policy decisions and said that the courts can step in if there is no policy or law in place.

It did not approve one of the recommendations of the three-member committee, headed by eminent academician Prof N RÂ Madhava Menon, that government advertisements should not carry photographs of any dignitaries including the President and the Prime Minister.

The apex court had on April 24 had set up the committee and decided to frame guidelines to prevent “misuse” of publicÂ funds by the government and authorities in giving ads in newspapers and television to gain political mileage. Earlier onÂ February 17, the government had opposed the framing of guidelines on regulating its advertisements, saying this did not fall under the ambit of judicial purview as an elected dispensation was answerable to Parliament.

It had also asked as to how would the court decide which advertisement has been issued to gain political mileage.

Appearing for the Centre, Attorney General (AG) Mukul Rohatgi had said that “there are matters which should be left to the government and are outside the purview of the courts” and had added that the government communicates to the public at large through these advertisements on policy and other matters.

Earlier, the court had refused to direct stopping of publication of government advertisements carrying photos of political figures saying that it would like to hear the Centre and others on a court-appointed panel’s recommendations to regulate publicity materials. It had asked the Centre and others including NGOs Common Cause and Centre for Public Interest Litigation (CPIL), which had filed the pleas,to submit responses on the panel’s report. The three-member committee had framed guidelines to regulate expenditure and contents of such advertisements paid out of tax payers’ money.

The committee, which comprised T K Viswanathan, former Secretary General of Lok Sabha and Solicitor General Ranjit Kumar, had recommended that there should only be a single advertisement, preferably by Information and Broadcasting Ministry, for commemorative occasions like birth or death anniversary of an important personality.