Home Politics NaMo all set to climb the China Wall 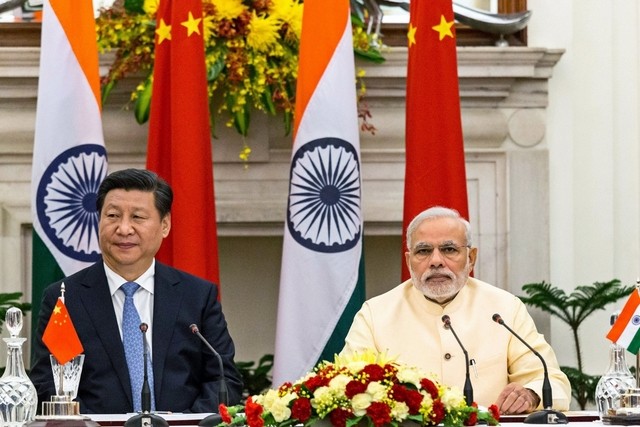 Indian Prime Minister Narendra Modi on Wednesday embarked on another three nation international tour, this time within Asia. He will be visiting China, Mongolia and South Korea in a six-day trip.

However, days before his visit to China, the governments of the two countries have taken strong stands over key issues that have been massive irritants in the past.

India has clarified that it has formally lodged a strongÂ demarche, diplomaticÂ protest against the Chinaâ€™s $46 billion investment in an economic corridor intended to create a network of roads, railways and pipelines linking China’s west to the Arabian Sea through Pakistan-Occupied Kashmir. The project is part of Beijing’s plan to expand its trade and transport footprint across Central and South Asia; it will give China easier access to Middle Eastern oil via the port of Gwadar in southwest Pakistan.

Beijing has been pushing India to accelerate work on a multibillion dollar rail link from New Delhi to Chennai ahead of Prime Minister Narendra Modi’s visit to China.

China, which is conducting a feasibility study into a $36 billion bullet train project from the capital in the north to Chennai in the south, has asked for work to begin on a pilot project covering part of the route, officials said.

The two sides have also agreed to speed up implementation of a shorter high-speed rail corridor from Chennai to Bengaluru, as China seeks to cash in on Modi’s vision of modernising a creaking train system that 25 million people use daily.

India Inc has urged the government to take up the issues facing industry in the neighbouring nation, especially in pharma, IT and media and entertainment.

â€œSectors such as IT, drugs and pharma, and media and entertainment pose several challenges for Indian firms. To contain the rising trade deficit between India and China, we have suggested urgent measures to reduce non-tariff barriers in these sectors,â€ Chandrajit Banerjee, director general, CII said.

Raising several market access issues Indian industry faces in China, the CII in its report â€” Accelerating Indo-China Economic Engagement â€” said that a four-pronged strategy should be adopted to deal with the Asian giant. This would include leveraging Indiaâ€™s importance as a market for Chinese products; push for market access in key sectors, prioritising Chinese FDI in 18 identified sectors and establishing a sovereign deal to attract investment in infrastructure; and setting up an institutional committee to monitor the achievement of goals.

However China is playing games with India. In Beijing, meanwhile, a think-tank published a scathing assessment of PM Modi, accusing him of “playing little tricks over border disputes and security issues, hoping to boost his domestic prestige while increasing his leverage in negotiations with China.”

The report, printed by a state-run think tank, says the PM must not visit Arunachal Pradesh, which China regards as disputed territory, and said, “The Indian government should completely stop supporting the Dalai Lama.”

Not surprisingly, the Indian government has chosen not to comment on the editorial, with the Prime Minister instead focussing only on bilateral ties in an interaction with Chinese journalists.Â  Arunachal Pradesh continues to be a sticking point with Beijing insisting that Tawang and the entire state of Arunachal Pradesh is a part of China. New Delhi is also uneasy with China’s continued support to Pakistan that has been fomenting terrorism against India.

However the Indian Prime Minister is using diplomatic language.Â

“I had a wonderful interaction with the Chinese media. Several issues were discussed during the interaction,” he said in a tweet posted on his Chinese microblog account Weibo.

“I highlighted the immense scope for further growth in India-China ties. We should pool our strengths to help the developing nations to move ahead and eradicate poverty,” he said.

“It is acknowledged that the 21st century will be Asia’s century. Asia is the land of Buddha. It is therefore, Asia’s responsibility to ensure that this century is the one which delivers freedom from war,” he said.

The Indian Prime Minister will also be under pressure to take up issues ranging from the boundary dispute, stapled visas for Indians from Arunachal Pradesh and the presence of Chinese troops in Pakistan-occupied Kashmir.

By prominently flagging the issue of the PoK project on the eve of his departure, the Prime Minister may just be signalling his intent to confront the thornier side of diplomacy, and move beyond the usual Hindi-Chini bhai bhai slogans.
Â