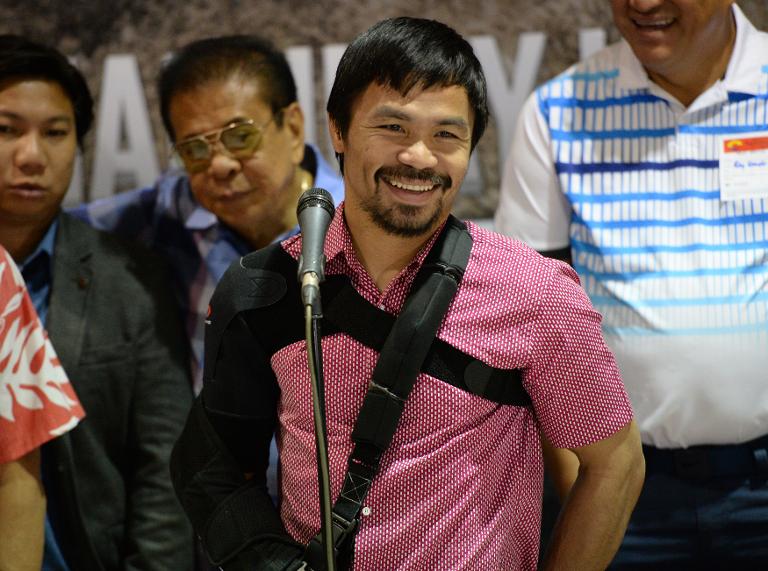 Manny Pacquiao made a low-key return to the Philippines on Wednesday after losing his mega-fight with Floyd Mayweather and said retirement was drawing closer as he recovers from shoulder surgery.

Few signs of Pacquiao’s early-morning arrival were visible at Manila airport, and he was later welcomed by modest crowds as he paraded the capital on the back of a flatbed truck.

It was very different from previous joyous homecomings for the eight-weight world champion and congressman, whose fights bring the Southeast Asian country to a standstill.

A smiling Pacquiao, his right arm supported by a black sling, told reporters he hadn’t yet decided on his future after his May 2 defeat by unanimous decision in Las Vegas.

“I will focus first on healing my shoulder. After that, I will announce continuing my career or announcing retirement,” Pacquiao said.

Pacquiao said it could take six months to recover from the operation on his torn rotator cuff, which he underwent days after what was billed as the “Fight of the Century”.

The American called Pacquiao a “sore loser” for blaming the injury for his defeat, and the Filipino is facing a law suit which claims he fraudulently concealed the problem.

Asked about a possible rematch with Mayweather, Pacquiao said: “I (would) like that. I want that. But my focus right now is my shoulder, my work as a congressman and my family.”

Pacquiao said he had accepted his defeat to Mayweather, but after reviewing the fight on video, he believed he won by a slim margin.

“I reviewed the fight and kept score. I won by two points… But a decision has been made and we have to accept it,” he said.

Despite the loss, officials still laid on the motorcade around Manila, where autographed T-shirts and CDs of Pacquiao’s songs were flung to waiting fans.

Later, the rags-to-riches “National Fist” was scheduled to pay a courtesy call to President Benigno Aquino.

Asked about his own presidential ambitions, Pacquiao said: “I am considering that. I am thinking about it.

“Our family has no other intention but to help our countrymen. We consider it an obligation.”

Pacquiao is not eligible to stand until he reaches the minimum age of 40, ruling him out of the next election in 2016, with 2022 likely to be his first opportunity.

But he said his wife’s worries over the enormous cost of higher political office — both to their bank accounts and to their family — was making him cautious.

“My wife said it’s difficult because we are losing time for our children,” Pacquiao said of his wife, Jinkee, with whom he has three sons and two daughters.

“We’ve also been spending millions out of our own pockets to help the poor. We can’t just shoo away people lined up at our door,” he said.

Pacquiao is on his second three-year term in the Philippines’ House of Representatives, representing his wife’s home province of Sarangani in the south.