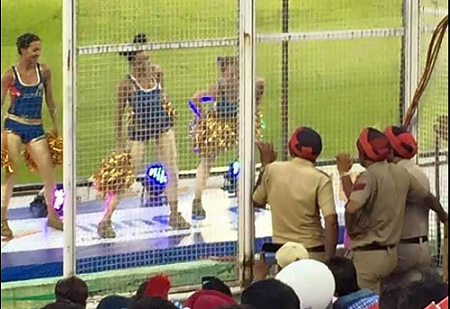 Mathura/Raipur: If youâ€™d thought that this edition of the IPL has learnt from all the mistakes of its predecessors, then thatâ€™s the biggest mistake youâ€™re making. Because, it hasnâ€™t. Betting is still rampant and is understood clearly from the fact that five bookies were arrested for allegedly betting on IPL matches during a raid at a shop in Mathura.

To add insult to injury of this menace still continuing despite several efforts to curb it, one of them even managed to run away.

The arrests were made as a team led by circle police officer Priyadarshini carried out the raid.

Nine mobile phones, one register with record of names and bets and Rs.14,570 were seized from the five youngsters arrested. The information revealed by these people would help in carrying out more raids in the coming days, police said.

“The network spreads from Mathura to Delhi and Mumbai and big bookies are involved,” said Pavan Gautam, an activist.

Meanwhile, there was a raid of another sort in Raipur, where IPL cheerleaders hired by the Chennai Super Kings franchise ahead of their clash against Delhi Daredevils were allegedly questioned by a bunch of policewomen, from Kotwali police station, who arrived in their SUVs. As per eyewitnesses, they used physical force on the girls, despite having no warrant.

In fact, calling this a â€˜routine checkâ€™, they also knocked on the doors of other guests, checking if there were any of the girls inside.