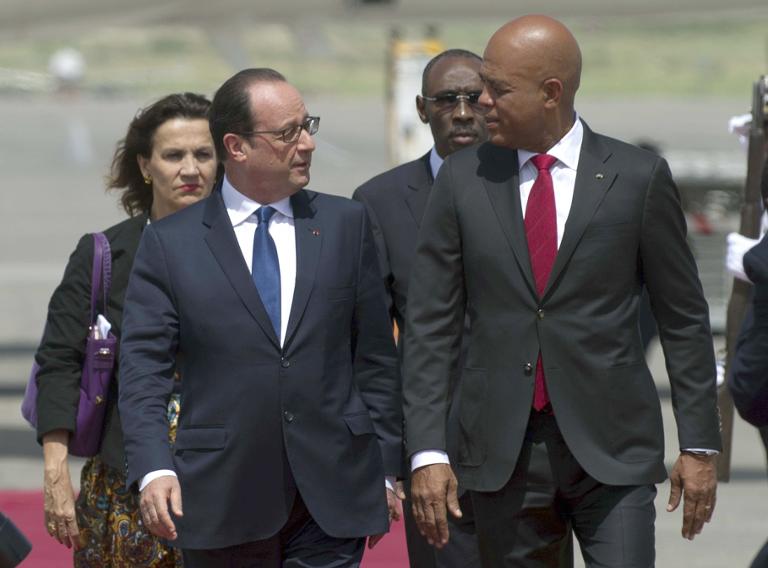 President Francois Hollande arrived in Haiti on Tuesday to boost France’s role in what was once its richest Caribbean possession but is now a desperately poor nation with a bitter colonial legacy.

Haiti’s President Michel Martelly rolled out the red carpet at the airport for his Parisian counterpart, but Hollande’s visit provoked small demonstrations by protesters demanding France pay damages for its past wrongs in Haiti.

“No negotiation, no compensation can repair the wounds of history that still mark us today,” Martelly told Hollande in a speech before an invited audience of dignitaries in the capital Port-au-Prince.

“Haiti has not forgotten, but Haiti is not stubborn,” he added, attempting to put an end to a fierce debate in Haiti about whether it can rebuild relations with its former colonial power without demanding reparations.

Hollande, in turn, promised Martelly that France would finance a large-scale program to modernize Haiti’s education system, but steered clear of the question of a multi-billion-euro cash payout.

Later, after private talks with Martelly, Hollande repeated that France’s investment in education should be seen as an appropriate effort to make amends for history.

“It’s the best symbol that we can offer together,” he said. “We can’t change history, but we can change the future.”

The leaders’ words will not appease all Haitians.

“It’s the money we need!” shouted protester Philistin Servilus from behind police lines as the guests gathered by a statue of Toussaint Louverture, a Haitian independence hero who died in a French jail.

Haiti rose in a slaves’ revolt after the 1789 French Revolution promised freedom, equality and brotherhood for all, but created a new regime that fell far short of those ideals in the country’s colonies.

In 1804, Haiti threw off its chains and became the first black republic, but France would have its revenge. Paris demanded Haiti pay damages or face invasion and a return to slavery.

Haiti paid what it could over the next century and is now the poorest country in the western hemisphere, suffering from corrupt local rule even before a devastating 2010 earthquake.

Since the quake, France has become one of the leading international donors helping rebuild the country, and Hollande has vowed his trip will begin a new round of aid and investment.

But he has stopped short of promising to return the “reparations” that former slaves paid their French masters — a sum activists now estimate at 17 billion euros ($19 billion).

And, to the extent that Hollande’s visit will be seen as an endorsement of Martelly’s rule, it will not be cheered by the thousands of opposition activists who regularly protest against corruption and delayed elections.

To boost trade, the presidents were due to sign several agreements, including one that will allow Haiti to export organically grown bananas to Europe’s protected market.

Speaking on the French Caribbean island Guadeloupe just before his visit, Hollande had raised hopes of reparations by suggesting that France would “repay its debt” to Haiti.

But his aides scrambled to dampen mounting excitement by insisting he was referring to a “moral debt” rather than a financial one — an idea mocked on at least one banner brandished as protests broke out on his arrival.

Hollande arrived as Haiti is finally preparing for elections after a three-year stand-off between Martelly and the opposition saw polls cancelled and parliament fall into disuse.

The Haitian leader’s many vocal critics had hoped Hollande would deliver a speech calling for democratic principles to be respected.

But protesters like Servilus are dubious, demanding that France’s debt be repayed, but cynical about what Martelly would do with the money.

“He shouldn’t give these billions to the government,” he told AFP as police kept the crowds back from the Champ de Mars square in downtown Port-au-Prince.

“He’ll just keep it all for himself, and the poor will get nothing as usual. France should build us houses and invest in factories, to give us jobs.”