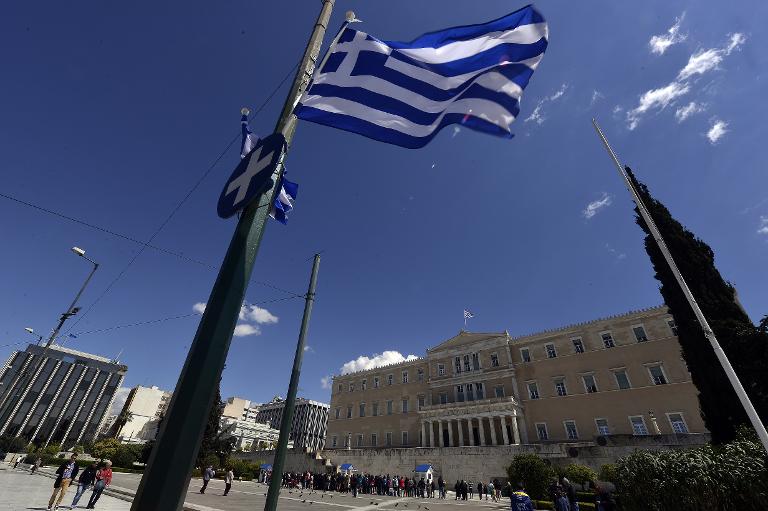 Greece admitted Tuesday it tapped into an emergency account to pay 750 million euros ($845 million) due to the International Monetary Fund, adding pressure to reach a deal to avoid crashing out of the eurozone.

Billions more in loan repayments are due over the next three months, and Greece’s Finance Minister Yanis Varoufakis warned that his country risked running out of cash within two weeks if no deal was reached with its creditors to unlock the last tranche of aid funds.

Greece won some support in the latest round of debt talks as it battles to keep itself solvent, but eurozone finance ministers have demanded more key reforms before they agree to release the final 7.2-billion-euro tranche of its EU-IMF bailout.

With the two sides standing firm on their positions, the government was informed last week by Greece’s central bank chief Yannis Stournaras that it could draw 660 million euros from a special account held at the IMF, like all member states.

That account holds Greek reserves and is only meant to be used in cases of “extraordinary need”, a central bank source said, adding that subsequent meetings with government officials and the IMF led to the release of the funds.

Greece “has done all it can for vis-a-vis its European partners, respecting the way of working in the eurozone; now it is the partners’ turn to take the adequate steps”, Greek Prime Minister Alexis Tsipras said on Tuesday.

Late Monday, Varoufakis warned after talks with his Eurogroup counterparts in Brussels the country faced a grace risk.

“The liquidity issue is a terribly urgent issue. It’s common knowledge, let’s not beat around the bush,” he said.

Experts say Greece is required to replenish the 660 million euros that it withdrew from the emergency account as soon as possible.

The remainder of the sum due to the IMF was scraped together by the government.

In Washington, the IMF confirmed receipt of the repayment, declining to give further details.

Even though it narrowly averted default on Tuesday, Greece faces a punishing debt repayment schedule in coming weeks.

Around 1.5 billion euros are due to the IMF in June and then more than six billion euros to the European Central Bank (ECB) in July and August.

“While the Greeks may have stumped up some cash to appease their creditors in the short term, unless they can get through the current impasse and reach agreement on austerity measures, markets will remain jittery,” said Mike McCudden, head of derivatives at stockbroker Interactive Investor.

Underlining the magnitude of the emergency, Greece’s government said in a statement Tuesday that local authorities and public agencies turned over 600.3 million euros following its decree ordering them to transfer their reserves and help the state cover its short-term financial obligations.

However, analysts like Credit Agricole’s Frederic Ducrozet said all these warnings are “clearly part of the negotiation”.

“Because as long as there is money to repay the creditors, there will be no deal,” he said.

He meanwhile warned that while Athens might meet its June target, there are “doubts over its capacity to pay salaries and retirement benefits”, which cost the state some 1.5 billion euros a month.

Should Greece fail to pay the IMF its due, it would only have another month to avoid a default, Ducrozet added.

Tsipras has called on Greece’s creditors for an “honourable compromise”, and the hard-left government reportedly plans a number of concessions to win them over.

German Finance Minister Wolfgang Schaeuble on Tuesday said the “atmosphere has improved” in the talks with Athens, but stressed that that did not automatically translate into progress in the negotiations.