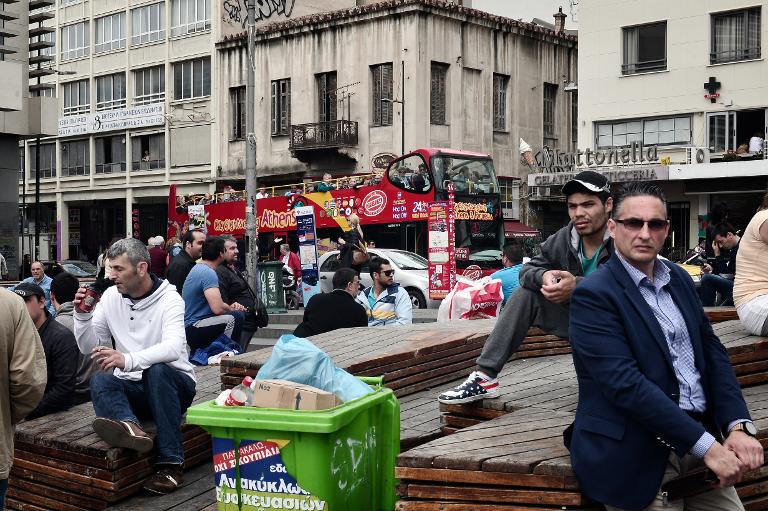 With no end in sight to tough talks with its creditors, Greece confirmed fears of economic slowdown by announcing Wednesday that it had slipped back into recession.

The Greek national statistics agency said the economy had contracted by 0.2 percent in the first quarter of this year, according to preliminary data.

The second consecutive quarterly fall in national output, following growth for most of 2014, coincided with a return to political uncertainty in the country and doubt over its 240-billion-euro ($270 billion) international bailout.

Greece’s economy had also contracted by 0.4 percent in the final quarter of last year.

Four months of deadlock between Greece’s radical Syriza-led government and its EU-IMF creditors over the reforms needed to release a final 7.2 billion euros in bailout funds has generated concerns Athens is running critically short of cash and may soon end up defaulting, setting off a messy exit from the euro.

“It appears that increasing uncertainty over the progress of negotiations between Greece and its official creditors… has lately been having a more pronounced effect on domestic economic activity,” said Platon Monokroussos, chief economist at Eurobank, one of the top four Greek lenders.

That has led the EU to drop its forecast for Greek growth this year to 0.5 percent from the 2.5 percent it had been forecasting as recently as February.

The EU’s economic affairs commissioner, Pierre Moscovici, had already admitted that there was a high degree of uncertainty with the forecast as it assumes Greece will reach a deal with its creditors.

The hard-left Greek government foresees the economy expanding between 0.1 and 0.8 percent this year, according to working documents.

Greece lost a quarter of its economic output in the six years of recession it suffered from 2008 as the country struggled with a debt crisis.

Market representatives have been warning for months that rising uncertainty would wipe out the fragile recovery achieved last year.

“The uncertainty has shaken faith in banks, and as a result, 30 billion euros have been withdrawn (by depositors),” financial analyst Manos Chatzidakis told AFP.

Even cut rate offers can’t jolt the market back to life, says the confederation of Greek traders.

A sales period in early May saw takings drop by between 11 and 20 percent compared to the previous period in winter, the confederation said.

Even worse, Finance Minister Yanis Varoufakis has warned that the country risks running out of cash within two weeks if no deal is reached with its creditors to unlock the last tranche of aid funds.

Greece on Wednesday raised 1.14 billion euros ($1.27 billion) in three-month treasury bills to buy itself some time.

But around 1.5 billion euros are due to the IMF in June, and then more than six billion euros must be paid to the European Central Bank (ECB) in July and August.

“Until the end of June the Greek government must find money to pay salaries and pensions… this is around 1.9 billion euros,” Chatzidakis said.

Chatzidakis argued that with the normally busy tourism season ahead — and the advantage of low fuel prices and a weak euro — there was still time to return to full-year expansion.

“There is enough time to save the year and see positive growth, so long as there is a deal in the next 15 to 20 days,” he said.