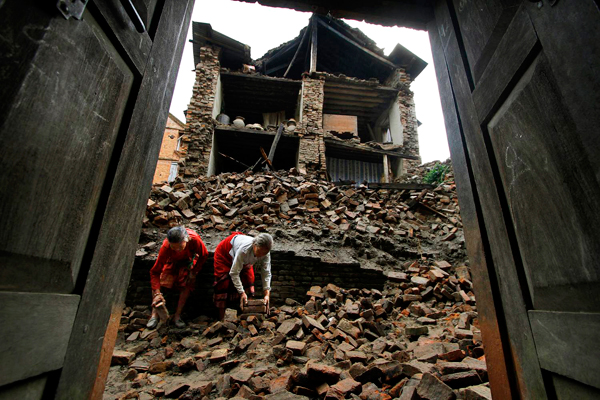 A second powerful earthquake in less than three weeks spread panic in Nepal on Tuesday, brought down buildings weakened by the first disaster, killing at least 66 people, including 17 in India and one in Chinese Tibet.

Most of the reported fatalities were in villages and towns east of Kathmandu, only just beginning to pick up the pieces from the April 25 quake that left more than 8,000 dead.

The US military’s Pacific Command said a Marine Corps helicopter involved in disaster relief had gone missing, with six US Marines and two Nepalese soldiers aboard.

TheÂ new 7.3 magnitude quakeÂ was centred 76 km (47 miles) east of the capital in a hilly area close to the border with Tibet, according to coordinates provided by the US Geological Survey, and unleashed landslides in Himalayan valleys nearMount Everest.

Villagers who watched their homes collapse said they only survived because they were already living in tents.

Aid workers reported serious damage to some villages in the worst-affected Charikot area and said some people were still trapped under rubble. Witnesses said rocks and mud came crashing down remote hillsides lined with roads and small hamlets.

In Kathmandu, around 150 people were taken to hospital though it was not clear if all had been injured in the quake and the aftershocks that followed. The constituent assembly building also emptied as lawmakers, meeting to discuss relief and housing for the April 25 victims, rushed out when the quake struck.

The Tribhuvan International Airport closed briefly and flights to Kathmandu were diverted. Authorities also ordered closure of schools for two weeks and advised people to spend time in the open.

Preliminary reports spoke of extensive loss of life and property in Solukhumbu on the Everest trail in the Sagarmatha zone.

In Bihar, the disaster management control room confirmed three deaths in Samastipur and one each in Patna, Darbhanga and Siwan.

A worker was killed in Danapur when a wall under construction collapsed. As tremors were felt, people fled from homes and offices, and remained in the open for hours.