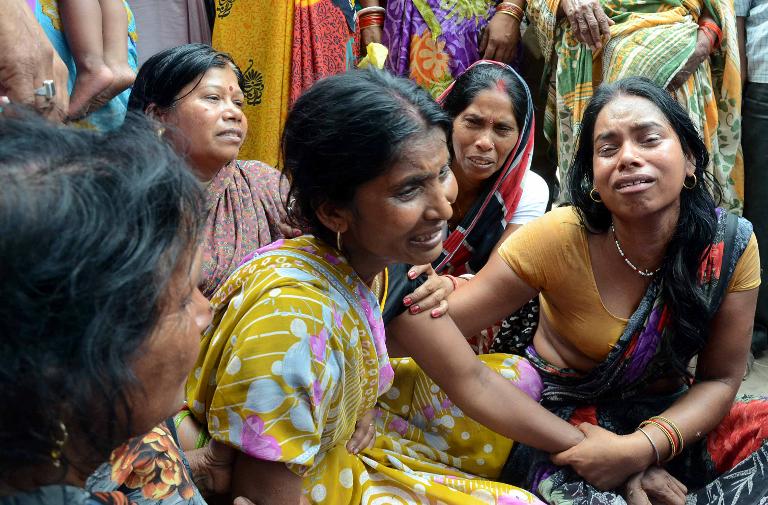 A new earthquake and powerful aftershocks killed dozens of people and brought fresh terror to a traumatised Nepal on Tuesday as buildings already damaged in a monster quake last month came tumbling down.

Weeks after the country’s deadliest quake in more than 80 years, terrified residents once again fled into the streets as houses collapsed and landslides blocked roads, hampering the relief effort.

Authorities in Nepal said at least 48 people were killed and more than 1,100 injured, while 17 people also died across the border in northern India.

Tuesday’s quake was felt as far away as New Delhi, and caused buildings to collapse in Tibet in neighbouring China, killing at least one person there.

A second tremor of 6.3-magnitude struck Nepal around half an hour later, followed by yet more aftershocks, according to the USGS.

But Dolakha and Sindhupalchowk, two of the districts worst affected by the original quake, bore the brunt of the damage. In Dolakha alone, 26 people were confirmed dead.

“Many houses have collapsed in Dolakha… there is a chance that the number of dead from the district will go up,” said Home Minister Bam Dev Gautam.

A US Marine Corps helicopter carrying out earthquake relief in nearby Charikot was reported missing Tuesday with six Marines and two Nepalese soldiers on board, officials said.

An aircraft search had spotted no sign of smoke or a crash site by nightfall, raising hopes the helicopter may have made a safe emergency landing, Pentagon spokesman Colonel Steven Warren said.

The Red Cross said it had received reports of large-scale casualties in the town of Chautara in Sindhupalchowk, where its Norwegian branch is running a field hospital.

“Hundreds of people are pouring in. They are treating dozens for injuries and they have performed more than a dozen surgeries,” said spokeswoman Nichola Jones.

An emergency tent hospital in Tatopani near the Chinese border run by the Canadian Red Cross was damaged by a landslide, she said.

There were several reports of landslides in the worst-hit areas, making the task of getting relief to remote communities in the mountainous country even more difficult.

Save the Children said the Gorkha region, near the epicentre of the April 25 quake, had also been hit by landslides and many key roads were blocked.

The charity said two major buildings had collapsed in Kathmandu, while many more multi-storey buildings were showing large fissures.

Regine Kopplow, a German aid worker who was in the Dolakha district headquarters of Charikot when the latest quake hit, saw huge dust clouds rise into the air as buildings collapsed.

“I saw a woman in the building opposite jump from the third floor who suffered injuries to her leg, elbow and hand,” said Kopplow, who works for Concern Worldwide.

“People stayed outside, the shaking continued. Some people were crying, hugging each other and sitting on the ground supporting each other.”

The Nepalese government has acknowledged that it was overwhelmed by the scale of the April 25 disaster, which destroyed nearly 300,000 homes and left many more too dangerous to live in.

“At an hour of a natural disaster like this, we have to face it with courage and patience,” Nepal’s Prime Minister Sushil Koirala said after an emergency meeting of his cabinet on Tuesday.

Scientists said Tuesday’s quake was part of a chain reaction.

“Large earthquakes are often followed by other quakes, sometimes as large as the initial one,” said Carmen Solana, a volcanologist at Britain’s University of Portsmouth.

“This is because the movement produced by the first quake adds extra stress on other faults and destabilises them,” she told the London-based Science Media Centre.

Residents of Kathmandu meanwhile described their sense of terror when the quake struck.

“We felt it and suddenly there were huge crowds running up and down,” said Suresh Sharma, who was in a vegetable market at the time.

“It was very scary and very difficult to make my way out,” said the 63-year-old.

Many in Kathmandu had begun to return to their homes after weeks sleeping in the open air, but after the second major quake in less than a month, several said they would go back to sleeping in tents.

“I was thinking of moving to a rented room, but today was so scary I can’t risk my family’s life,” Dipak Koirala, who has been living under a tent since April 25, said by phone from central Ramechhap district.

“We will continue to stay in the tent but it’s wet here and the rain came into the tent, which we are sharing with 24 people.”