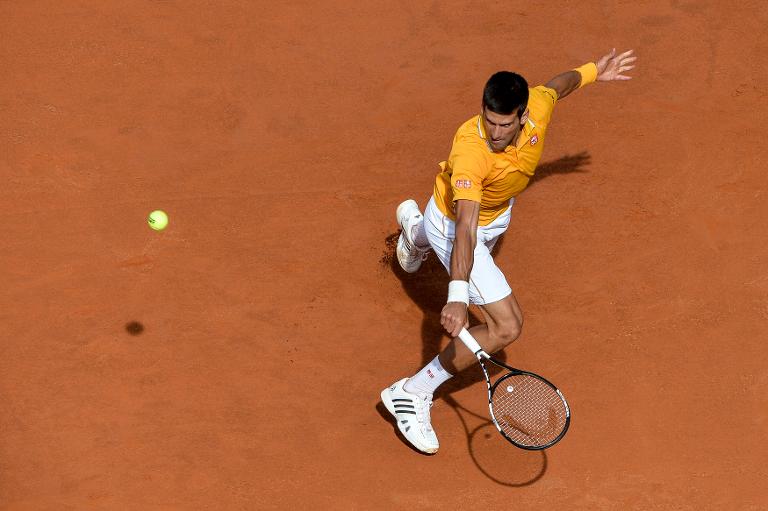 Holder Novak Djokovic needed a late break in the final set to beat Nicolas Almagro 6-1, 6-7 (5/7), 6-3 in an opening match at the Italian Open on Tuesday.

The Serb world number one took his record on the clay of the capital to a 30-5 career record here, with titles in 2008, 2011 and a year ago over Rafael Nadal.

Djokovic broke for 5-3 against his Spanish opponent and served out the victory, finishing with 11 aces and just one break of serve.

It was the first competitive outing for Djokovic since winning Monte Carlo almost a month ago. The Serb is now riding an 18-match win streak.

“I experienced some ups and downs but the confidence I have from many matches won this year helped me,” said Djokovic.

“I was expecting him to bounce back and start playing better and thatâ€™s what he did.

“He deserved to win the second set even if I could have maybe prevailed in the tie break. But at the end of the day itâ€™s a win. After three weeks with no official match, in the important moments I did feel a little bit uncomfortable.”

Andy Murray will take to the court on Wednesday after agonising with his team as to whether he should play.

The back-to-back champion at Munich and Madrid will start against France’s Jeremy Chardy.

Murray’s team was split on whether he should compete or rest, with the competition view winning out.

Murray, who defeated Nadal in a shock result in the Madrid final, said his preparation for the French Open seemed to be on track.

“This year I feel a lot healthier on the clay, I have to thank my team, which has made some big changes in my clay preparation. That’s helped for sure,” the Scot said.

“I also didn’t feel much pressure last week, I didn’t have very high expectations. I just played and felt better and better in each match.”

As the complex scheduling of the event proceeded, results were all over the charts.

Former number one Victoria Azarenka, finalist two years ago against Serena Williams, continued her revival after an injury-plagued 2014, advancing over Czech Lucie Hradecka 7-5, 2-6, 6-1.

Third seed Maria Sharapova became the first into the third round as she advanced when Australian Jarmila Gajdosova retired trailing 6-2, 3-1.

In the men’s first round, Guillermo Garcia-Lopez beat slumping US Open winner Marin Cilic, the Croatian ninth seed going down 6-4, 6-3.

But Kyrgios remains excited by his inclusion as a seed in Paris.

“You donâ€™t have to face any of the top guys at the first or second round, itâ€™s a massive advantage. Iâ€™m doing good on the clay, I was just unlucky today. Iâ€™m more than confident for the French Open,” he said.