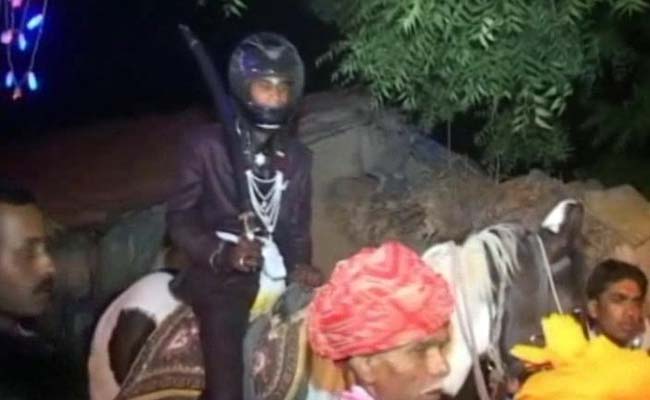 A big fat Indian wedding is nothing short of a modern version of a war. It requires months, if not days of planning just so that a few families can be at peace with each other and in the society.

However, if one adds a caste-ist twist to all of this, one gets the ideal Indian wedding of the backward classes in the country.

A groom in Ratlam of Madhya Pradesh traded his orange safaa or turban for a sturdy helmet as upper caste men in his village attacked him with stones – all because he dared to ride a horse to his wedding.

Late on Sunday night, Pawan Malviya’s baraat or wedding procession slowly made its way through his village in Ratlam district. Pawan wore a dark suit, a long necklace and carried a sword as he sat on the horse. Along with a helmet, he cut an unusual figure.

A short while before that, around half a dozen members of Pawan’s family were injured as stones were hurled at them.

Pawan belongs to the Dalit or unprivileged caste and was told by upper caste villagers that members of his caste are not allowed to sit on a horse or take out grand processions.

The family, worried that it would be attacked, asked for police protection.

As part of what district officials described as a compromise between the two sides, the upper caste families agreed to keep their doors shut so they would not have to watch a Dalit groom on a horse.

Despite this, Pawan’s procession was attacked with stones when it reached the village square, and blocked.

“They are not letting us go. They keep threatening us and trying to drive us away. We will carry on with help from the police,” Pawan, still wearing the safaa, told reporters.

When the group resumed its journey, the groom was wearing a helmet and policemen in riot gear had joined his procession.

Around 30 villagers have been arrested and scores more have been booked under a law that bans caste-based atrocities.

“It is a dispute between two groups in the Nirun village. The procession was finally allowed to move peacefully and without incident. We have registered a case against around 70 people,” said a senior police officer.