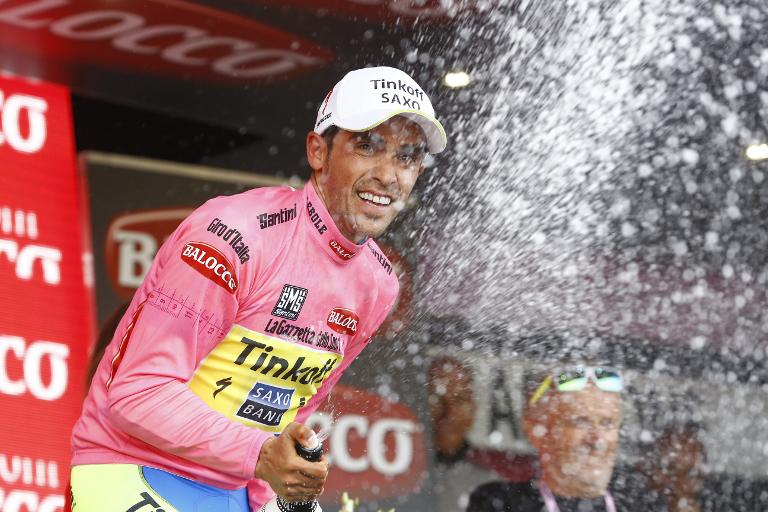 Lampre’s Polanc, 23 and on only his second major tour, was the survivor of a long breakaway, coming home 1min 31sec ahead of fellow escapee, veteran Frenchman Sylvain Chavanel, who just held off the chasing peloton at the summit finish of the gruelling Abetone.

Polanc, who was 42nd in last year’s Giro on his debut in the contest, said it was the perfect late birthday present.

“The day I came to the Giro, I turned 23, so this is a wonderful birthday present,” said Polanc.

“It feels strange, and hard to believe. I don’t think I’ll sleep tonight.

“My legs were good today, and my goal was to build a big lead, and then worry about who was the strongest.

“I’m a good climber, but the climb isn’t steep and Chavanel is a good rider.

“When I was on my own, they told me the chase behind was fast, but when I heard my gap, I knew that I would win.”

Contador, who is attempting to become the eighth rider to achieve the double of the Giro and the Tour de France in the same year, said that, seeing some of his rivals for the overall victory drop away, he had decided to go on the offensive.

“My attack wasn’t planned. I felt good, looked around, and went,” said Contador, who is bidding to become the first rider since Marco Pantani in 1998 to pull off the double.

“Aru and Richie Porte are strong, but UrÃ¡n and others were dropped and I’m happy with the situation after five days.

“I didn’t expect the Maglia Rosa, but to have it is always fantastic. It’s a nice present, and a real honour.

“I love the Giro d’Italia, the people and the country, and to wear the Maglia Rosa tomorrow during the stage will be fantastic, although the one that counts is the Maglia Rosa in Milan, so if someone else takes it tomorrow (Thursday), it won’t be a problem.”