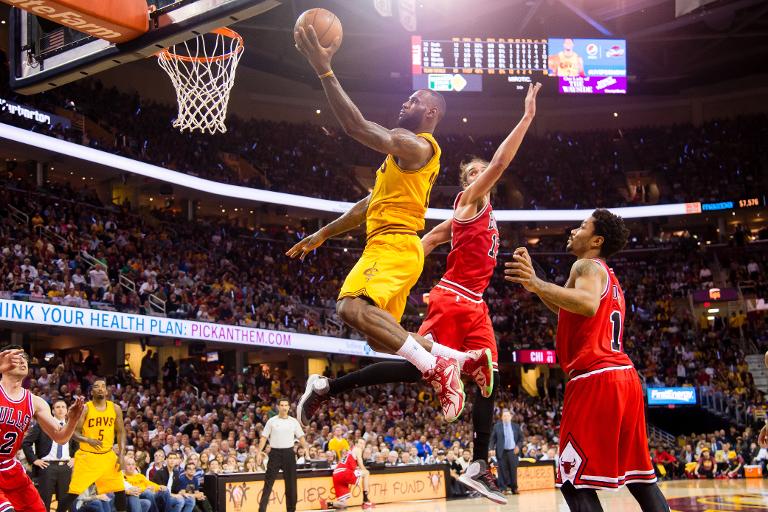 LeBron James didn’t let a sprained ankle slow him down as he played his best game of the postseason, scoring 38 points as the Cleveland Cavaliers beat Chicago 106-101 in game five of their playoff series.

James, who leveled the series at 2-2 with a buzzer beating jump shot in game four, also tallied 12 rebounds and six assists Tuesday for the Cavaliers who took a 3-2 lead in the best-of-seven Eastern Conference series.

“I think our coaching staff did a great job putting me in a position to be successful,” said James.

In the late game, Dwight Howard finished with 20 points and 15 rebounds and James Harden had a triple double as the Houston Rockets forced a game six with a 124-103 win over the Los Angeles Clippers.

Kyrie Irving scored 25 points and guard Iman Shumpert grabbed a crucial offensive rebound in the final minute for Cleveland in the victory.

“We made shots,” said Cleveland coach David Blatt. “Some of the same shots that we were missing in recent games.”

James did not take part in Tuesday morning’s practice, preferring to rest his sore ankle, but he was all business against the Bulls in game five.

James had three steals and three blocks and did not commit a turnover. With this performance, he matched Michael Jordan with his 51st playoff game with at least 30 points, five rebounds and five assists.

James and Irving combined to shoot 23-of-40 from the field. Irving was also playing with injuries that included a sprained right foot and left knee tendinitis.

It is the first time a team in this series has won consecutive games and Cleveland can now wrap up the set and advance to the league semi-finals with a win Thursday in the Windy City at the United Center arena.

If the Bulls win on home court, game seven would be Sunday in Cleveland.

Chicago guard Jimmy Butler had 29 points and nine rebounds, including a pair of three-pointers late to give the Bulls a glimmer of hope. Guard Derrick Rose finished with 16 points, nine rebounds and seven assists.

Chicago head home trying once again to stave off elimination from James, who ended the Bull’s season in three of the past five years.

“I liked the fight that we had to come back,” said Bulls coach Tom Thibodeau. “But we have to play a lot tougher than we played tonight.”

Forward Pau Gasol missed the game for the Bulls with a hamstring injury. Tuesday’s contest was intense and at times also physical. Forward Taj Gibson was ejected in the fourth quarter after a dust up with Cleveland guard Matthew Dellavedova that led to pushing and shoving by both teams under the basket.

“That’s what happens when you’re in Cleveland,” said Gibson. “I didn’t kick him at all. He just leg-locked me. It got chippy at the end.”