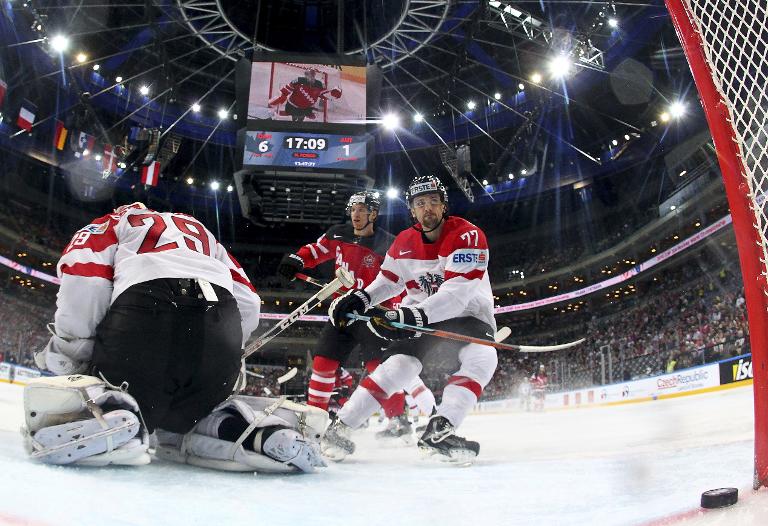 Canada kept their perfect record at the ice hockey world championships as they swept Austria in the last group game on Tuesday to face Belarus in Thursday’s quarter-finals in Prague.

The United States won Group B and will play Switzerland in the eastern Czech city of Ostrava on Thursday, while defending champions Russia will take on Sweden in Ostrava and Finland will face the hosts Czech Republic in Prague.

Dallas forward Jason Spezza and Colorado forward Matt Duchene had two goals and two assists each as Canada humiliated Austria 10-1 in Group A, outshooting the minnows 46-15.

Tyson Barrie, Duchene, Taylor Hall and Aaron Ekblad put Canada 4-0 ahead in the first period and Spezza and Jordan Eberle made it 6-0 by the second intermission.

Dominique Heinrich scored for Austria early in the final period, but Nathan MacKinnon, Spezza, Brayden Schenn and Duchene rounded off the scoring.

Canada have advanced to the quarter-finals with seven wins from as many games and an impressive goal difference of 35.

“It is nice to finish first in the group but it really doesn’t mean much,” Spezza said.

“We’re here to win the gold medal and we have to start with winning our next game.”

Belarus earned a spot in the quarter-finals after beating Norway 3-2 in a Group B game on Tuesday.

Alexei Kalyuzhny scored on a power play eight minutes into the game and Dmitri Korobov and Andrei Kostitsyn made it 3-0 in the second period, also with power-play goals.

Norway scored twice to add some drama to the game, but Belarus held on to the points they needed.

“They’re a dangerous team… they have lots of skill and some good offensive players,” said Spezza.

Group B leaders the United States were on track to humiliate Slovakia with goals by Ben Smith, Seth Jones and Anders Lee that handed them a 3-0 lead by the 21st minute.

But Slovakia, already out of contention for the quarter-finals, produced a spectacular comeback with four goals within 12 minutes of the second period.

Charlie Coyle levelled before the second intermission and Jack Eichel then scored the winner in overtime to make it 5-4.

“It’s good for us to win our bracket and be able to control our own destiny,” Eichel told the championship website.

Later in the same group, Russia beat Finland 3-2 in a penalty shootout.

Russia took the lead before the first intermission with a goal by Sergei Mozyakin but Aleksander Barkov, who has both Finnish and Russian nationality, put Finland level on a power play in the 25th minute.

Artemi Panarin scored for Russia five minutes before the end but Joonas Donskoi levelled again and then converted the only penalty in a five-round shootout.

In Prague, France miraculously escaped relegation after beating Latvia 3-2 in a shootout, sending Austria down instead alongside Slovenia, the last team in Group B.

Latvia took a 2-0 lead with two power-play goals in the first two periods, but France put the score level five minutes from the end and were luckier in the shootout.

In yet another shootout, the Czech Republic beat Switzerland 2-1 in Prague.

Kevin Fiala, whose parents are Czech, handed Switzerland a 1-0 lead in a 5-3 power play on 17 minutes and the Czechs found it hard to beat Colorado’s Reto Berra in the Swiss goal — until the 51st minute when Martin Zatovic slammed the puck into the top corner.

The Czechs then scored twice in the shootout, against a single goal for Switzerland.