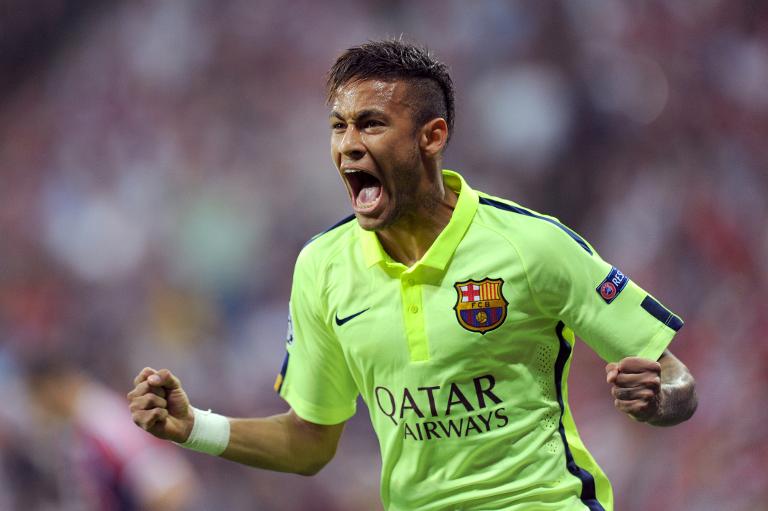 Neymar struck twice as Barcelona reached the Champions League final by beating Bayern Munich 5-3 on aggregate in their semi-final despite losing Tuesday’s second-leg 3-2 at the Allianz Arena.

Luis Enrique’s Barca survived a Bayern second-half fightback to keep alive their treble dreams as they close in on winning the Spanish league and face Athletic Bilbao in the Spanish Cup final on May 30.

“It’s a great achievement to reach the final,” said Enrique, whose side has still yet to win in Munich despite five attempts.

“We forced the opponent to attack us, so we took some risks.

“Bayern were very physical, especially in the second half, they really wanted to turn it around.

“I am very satisfied with the performance of my players, the whole team deserved the victory and we have to enjoy this.”

In contrast, Pep Guardiola’s Bayern bowed out at the last-four stage for the second year running, despite ending Barcelona’s 18-game unbeaten run.

Bayern were facing what looked like an impossible task after going down 3-0 in last week’s first leg at the Camp Nou, but they were given an early glimmer of hope in the return when the unmarked Medhi Benatia headed home on seven minutes.

However, the final outcome of the tie was put beyond doubt when Luis Suarez twice set up Neymar to score for the visitors before half an hour had been played.

Bayern produced a rousing second-half performance and goals from Robert Lewandowski and Thomas Mueller allowed them to win the game on the night, but Barcelona advance to the final in Berlin on June 6, where they will face either bitter rivals Real Madrid or Juventus.

“We believed in the miracle, but we couldn’t make it happen,” said Bayern captain Philipp Lahm.

“It’s impossible to stop those players for the whole 90 minutes.

“We didn’t lose it today, but in the first leg.”

While Lionel Messi dazzled in the first leg by scoring twice and setting up Neymar in a 3-0 romp, it was the Selecao star who extinguished Bayern’s Berlin dreams and took his tally to 11 goals in his last 10 games.

Before that, Bayern opened the scoring when Xabi Alonso floated in a corner and Benatia headed home unmarked for his first Champions League goal.

That ended Barca’s seven-match run without conceding and briefly put life back into the hosts’ faint dreams of reaching an 11th European Cup final. But it was not to last.

With the game running at a frantic pace, Messi put a ball in behind the Bayern defence for Suarez to square for Neymar to have a simple tap-in on 15 minutes.

Both sides had their chances when Lewandowski, then Mueller, fired at ter Stegen and at the other end Messi did the same at Manuel Neuer.

But Barcelona put the tie beyond the hosts when Suarez broke on the right and again squared unselfishly for Neymar to fire inside the near post and make it 2-1 on the night and 5-1 on aggregate.

Bastian Schweinsteiger then had a bullet header saved and ter Stegen clawed a Lewandowski attempt off the line with half-time approaching.

Luis Enrique rested Suarez for the second half and the game’s tempo dropped, but Lewandowski kept home fans dreams alive by firing past ter Stegen on 59 minutes, while Mueller fired wide with a shot minutes later.

Mueller made good on his pre-match promise that Bayern would fight until the final whistle when he blasted Schweinsteiger’s squared pass home on 74 minutes to make it 5-3 on aggregate, but it was too little, too late.