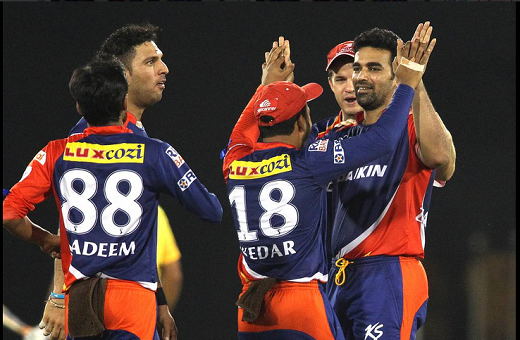 Electing to bat, Chennai scored just 119 for 6 with Zaheer returning with superb figures of 2 for 9 from his four overs and Albie Morkel chipping in with two wickets as Delhi produced a disciplined bowling show at the Shaheed Veer Narayan Singh International Stadium.

Chasing the small target of 120, Delhi, who are already out of contention for a play-off berth, lost two quick wickets to be reduced to 24 for two in the fifth over as opener Quinton de Kock (3) and captain Jean-Paul Duminy (6) were out cheaply.

But young Iyer and veteran Yuvraj Singh (32) repaired the Delhi innings with a 69-run stand for the third wicket and set up the easy victory with 3.2 overs to spare.

Today’s win was Delhi’s fifth from 13 matches and in the process they snapped their four-match losing streak this season though the victory did not have much significance as they remain on seventh spot in the league table with 10 points with one match left to play.

Interestingly, Delhi snapped their seven-match losing streak against Chennai in the IPL.

For Chennai, today’s loss means they are yet to seal a play-off berth though they still remain on top of league table with 16 points from 13 matches with one match left to play.