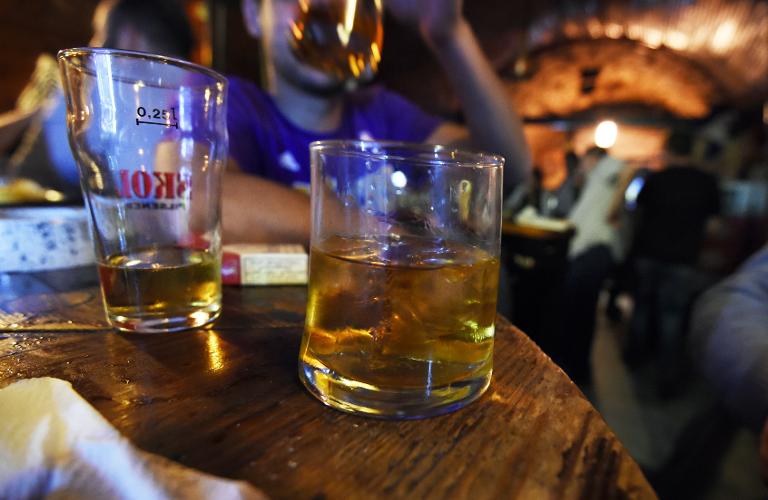 Binge drinking is emerging as a major hazard for the young in some countries, the Organisation for Economic Cooperation and Development (OECD) said Tuesday in its first probe into alcohol abuse.

Over the past 20 years, alcohol consumption in OECD countries has declined by 2.5 percent on average, the 34-nation club of rich economies said.

But this figure masks important national changes and a worrying shift in some countries towards youth boozing and excessive drinking by women, it said.

In 2012, the average per-capita consumption in the OECD was 9.1 litres (16 pints) of pure alcohol per capita, it said.

Estonia, Austria and France had the highest consumption, with 12 litres or more per person per year.

Those countries below the OECD average included South Korea, the United States and Canada, while the lowest on the list were Israel and Turkey.

Within the broad overall decline, “many countries have experienced a significant increase in some risky drinking behaviours,” the report said.

It cited binge drinking among young people and alcohol abuse by women.

“These trends are worrying because some of the harms typically associated with heavy drinking in young age, such as traffic accidents and violence, often affect people other than drinkers themselves,” said the report.

“Heavy drinking at a young age is associated with an increased risk of acute and chronic conditions.

“It is also associated with problem drinking later on in life, and people who are successful in the labour market may see their long-term career prospects jeopardised.”

The biggest surge in youth drinking was seen in Russia, followed by Estonia, and then India and China, which like Russia have partnership status with the OECD and were included in part of the analysis.

But there were declines in youth drinking in Italy, France and Slovenia.

The binge-drinking phenomenon appears to have several causes, the OECD said.

They include access to relatively cheap drink, but also the pitching of alcoholic beverages to a youth market, promoted with music and a partying message.

The report, “Tackling Harmful Alcohol Use”, also made these points:

– Most alcohol in the OECD is drunk by the heaviest-drinking 20 percent of the population. But much of the overall consumption — close to 11 percent — may go unrecorded by governments.

– People from minority ethnic groups in OECD countries tend to drink less alcohol than the majority of the population, but with important exceptions in some countries.

– The proportion of under-15s who have been drunk at one point increased from 30 to 43 percent among boys, and from 26 to 41 percent among girls, during the same period.

– People with higher levels of education and socio-economic status are likelier to drink alcohol.

– Alcohol consumption in big emerging countries, according to data from non-OECD economies, has seen a relatively major increase, but starting from much lower levels.

The report said that worldwide harmful consumption of alcohol rose from eighth to the fifth leading cause of death and disability from 1990 to 2010.

Curbing dangerous drinking requires a basket of strategies, focused especially on the “social norms” that drive boozing, it said.

“A tax hike leading to an average increase of 10 percent in alcohol prices, as well as a range of regulatory approaches, would also generate large impacts,” it said.