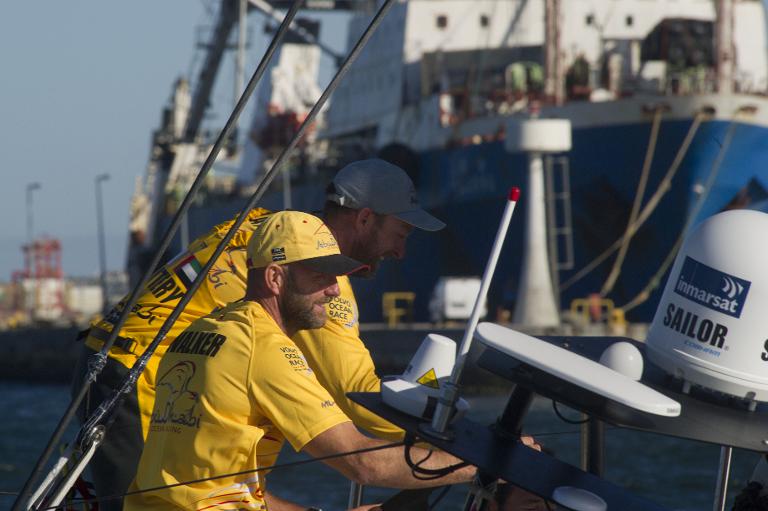 Ian Walker believes his Abu Dhabi team are on course for a victory in the Volvo Ocean Race that would settle a sense of “injustice” from the last round-the-world epic.

Hiking up the pressure the Chinese-backed vessel won the latest duel into Newport, Rhode Island to narrow the lead. Walker, a two-time Olympic silver medallist, is hoping however that the disasters of 2011-2012 can be avoided.

In that race, the Abu Dhabi boat broke a mast during the opening leg and later suffered hull damage, which forced it to retire from the crucial race from Auckland to Itajai, in Brazil. The team eventually limped home fifth.

But Walker denied he was seeking “revenge.”

“The word is too strong. I always felt a sense of injustice in the previous race. I knew we were sailing well. I knew we had a good team and I knew that we deserved better.

“But it’s like a Formula One race. If you haven’t got the car, never mind how good the driver is. We had the potential to win but we never had the opportunity to demonstrate it.”

This time Abu Dhabi Racing are in control and Walker says they only have to finish in the top three in each leg to claim the coveted title. He is taking nothing for granted however.

“In offshore sailing, you can always break something, crash into something or make a big tactical error.

“The race is not over yet at all. But we are in a strong position, a position where we don’t have to beat Dongfeng in every leg. Which is important.

“We can afford to lose a point here and there. We don’t have to chase the race. Fundamentally, if we finish in the top three in every leg, then it’s OK. We dont need to change anything in the way we sail.”

Walker was to gather the eight man crew together on Tuesday to discuss tactics before they leave on May 17 for the Newport-Lisbon leg.

The Briton said that changing the race so everyone has the same boat design has had a dramatic impact on the competition.

“Last time, we had big differences between the boats. And therefore, you had teams who had no chance of winning.

“This time around it’s amazing. There are still differences between the teams and the boats, but obviously it’s down to you and how you sail the boat.

“You cannot modify the boats but you can play with the weight you carry. You can be generous or tight with your food weight. Not much else.

“We have learned a lot against Dongfeng going downwind in light air. The team that wins this race will be the team who improves most. We’re still learning a lot.”

This time Dongfeng has suffered a broken mast and other troubles but Caudrelier has battled back.

Walker knows there could be a rough ride ahead and the rivalry with the French skipper will be intense.

“No other team has been consistently in the top three. We have had very similar results. We’ve been neck to neck all race,” said Walker.

After Lisbon there are two legs to France and Gothenburg, Sweden where the event ends about June 27 after a 38,739 nautical mile race taking in 11 ports on every continent.