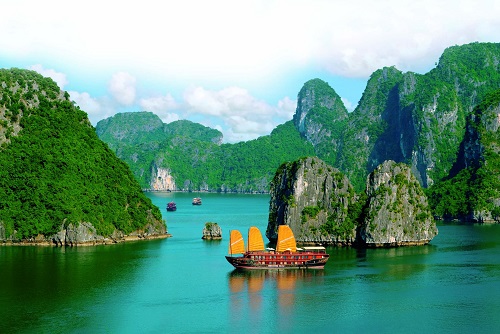 Hanoi: Vietnam, which is fast-emerging as a major tourist destination in the world, is eyeing India as a potential market to attract visitors to its scenic locations and the treasure trove of war-time history.

India is a potential market for Vietnam in terms of tourism, he said adding that the bilateral relations between the two nations have always remained good.

A total of 2.17 lakh Vietnamese tourists including those residing overseas visited India in 2014 while 54,000 Indian tourists visited Vietnam, Nguyen said, who was on a visit to attend the 40th anniversary of 30-year-long Vietnam War and its reunification.

Vietnam is home to some scenic locations and having humbled major powers like the US, France and China in armed conflict it also showcases its war history by displaying weapons, planes and helicopters in the War Remnants Museum for inspiring young generations.

The museum is specialised in research, collecting, preserving and exhibiting the remnant of the Vietnam War. Through these remnants, the museum intends to tell people to say no to war.

Nguyen also listed the beautiful locations in the country like scenic Ha Long Bay and the ‘The Temple of Literature’, Vietnam’s first university, which could become major tourist attractions.

“A visit to Vietnam is incomplete without visiting Ha Long Bay. If a person did not visited Ha Long Bay, then it means he has not visited Vietnam,” he said.

Nguyen also insisted on starting a direct flight between India and Vietnam to help boost tourism and trade.

“The people here are very warm and cooperative. Indian goods have immense opportunities in the country specially during season as weather is quite good in the country throughout the year,” Adil Bazaz, owner of a shop selling Kashmiri handicrafts in Ho Chi Minh City’s Vissai Saigon Hotel, said.

Nguyen also said Vietnam is planning to hold a road show in India for promoting tourism.

One such road show has already been organised while two more will be held in the days to come in cities like Chennai and Hyderabad, he said.

Vietnam has also invited Bollywood to promote their country in India and a team would soon visit the nation while a film festival will also be organised, Nguyen said.

“Bollywood can be a good tool to market Vietnam as a tourism destination in India,” he added.