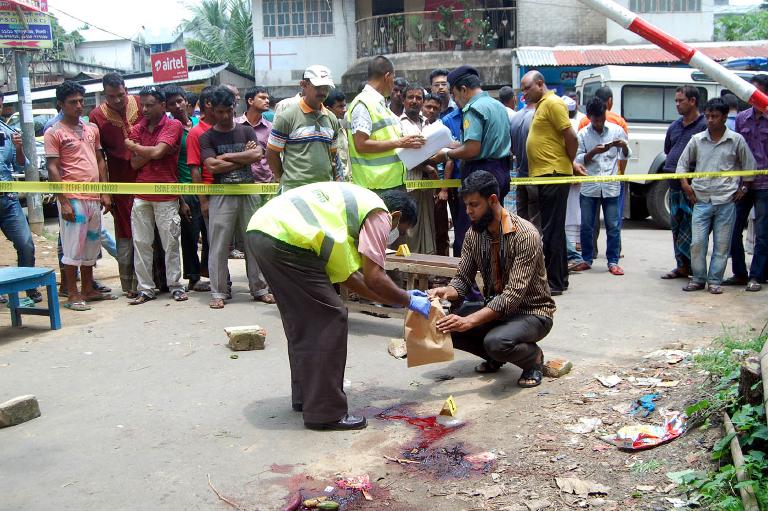 A masked gang wielding machetes hacked a secular blogger to death Tuesday in northeastern Bangladesh in the third such deadly attack by suspected Islamists since February.

Police said Ananta Bijoy Das was murdered in broad daylight as he headed to work at a local bank in the city of Sylhet, an attack that fellow writers said highlighted a culture of impunity.

Kamrul Hasan, commissioner of Sylhet police, said a group of around four masked men had attacked Das with machetes at around 8.30am on a busy street in Bangladesh’s fifth largest city.

“They chased him down the street and first attacked his head with their machetes and then attacked him all over his body,” Hasan told AFP.

After the attackers fled into the crowds, Das was rushed to hospital but declared dead on arrival, police and medics said.

Police commissioner Hasan would not comment on the motive for the attack but fellow writers said Das had been on a hit-list drawn up by militants who were behind the recent killing of blogger Avijit Roy.

Imran Sarker, head of a Bangladeshi bloggers’ association, confirmed to AFP that Das was an atheist who regularly blogged for Mukto-Mona.

The website used to be moderated by Roy, a Bangladeshi-born US citizen who was hacked to death in the capital Dhaka in February.

“We condemn this heinous killing. It once again confirms our fear that there is a culture of impunity in Bangladesh. Anyone can now get away with killing a progressive free thinker,” Sarker said.

Police chief Hasan said they were investigating an announcement by an unknown group that Al Qaeda in the Indian Subcontinent (AQIS) was behind the killing.

AQIS has already claimed responsibility for the deadly attack on Roy on February 26 in which his wife was badly injured. An Islamist has been arrested over his murder.

A group called Ansar Al-Islam said on Twitter that AQIS was responsible for Das’s murder and warned of more to come.

Debasish Debu, a friend of Das, said the 33-year-old banker was an editor of a quarterly magazine called Jukti (Logic) and headed the Sylhet-based Science and Rationalist Council.

“In recent months he received threats from Islamist extremists for his writings. He was on their hit-list,” Debu told AFP from Sylhet.

“He was hacked on the head repeatedly, the same way Roy was attacked by the assailants,” Debu added.

According to the Mukto-Mona site, Das won the publication’s annual Rationalist Award in 2006 for his “deep and courageous interest in spreading secular and humanist ideals and messages”.

While most of Das’s output for Mukto-Mona focused on science and evolution, he wrote a number of blogs that criticised some aspects of Islam and also of Hinduism.

He also wrote a poem eulogising the famed Bangladeshi secular writer Taslima Nasreen, who fled to Europe in 1994 after protests by Islamists and now lives in India.

In comments on Facebook posted early Tuesday, Das slammed the local member of parliament from the ruling Awami League party for criticising one of the country’s top secular and science fiction writers.

The murder came less than two months after 27-year-old atheist blogger Washiqur Rahman was hacked to death in Dhaka in March. Two madrassa students have been arrested over that attack.

Bangladesh is an officially secular country but more than 90 percent of its 160 million population are Muslims.

The country has seen a rise in attacks by religious extremists in recent years. Supporters of Bangladesh’s largest Islamist party, which is banned from standing in elections, have been accused of being behind a spate of firebombings since the beginning of the year aimed at toppling the government.

Since 2013, at least five bloggers have been attacked by Islamists after another hardline group, Hefazat-e-Islam, publicly sought the execution of atheists who organised mass protests against the rise of political Islam.