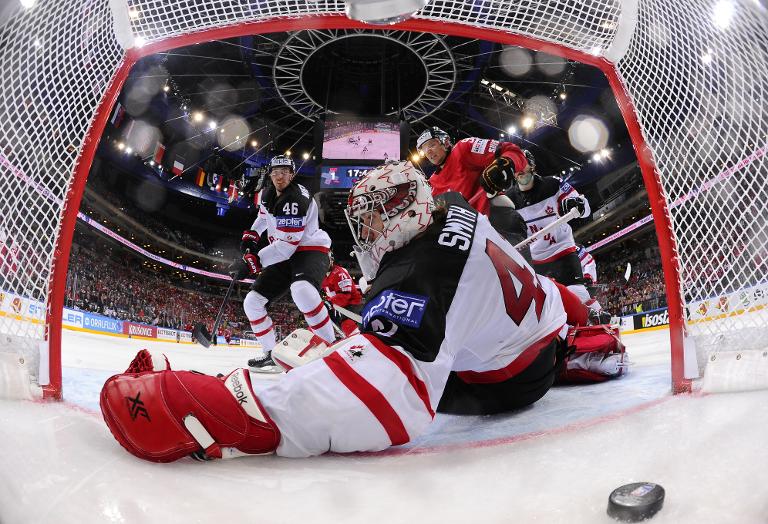 Switzerland clinched a spot in the ice hockey world championships quarter-finals on Monday as Germany lost to Austria in a shootout and lost a chance to advance to the play-offs.

Switzerland have made it to the quarter-finals alongside Group A rivals Canada, Sweden and the Czech Republic.

The USA, defending champions Russia and Finland have clinched a play-off berth from Group B, with the last place in the quarter-finals to be taken by either Belarus or Slovakia on Tuesday.

In Group A, played in Prague, Austria beat Germany 3-2 in a penalty shootout.

Austria took a lead 35 minutes into the game when Philadelphia forward Michael Raffl set up his brother Thomas, but German captain Michael Wolf made it 1-1 on 45 minutes.

Austria went ahead again 10 minutes later through Rafael Rotter, but Germany levelled the score once again through Patrick Reimer.

Austria converted two penalties in a shootout against one for Germany, with the decisive goal scored by Konstantin Komarek.

In the group’s other game, Sweden beat France 4-2 after coming back from 2-1 down.

New Jersey forward Jacob Josefson handed Sweden a 1-0 lead on 11 minutes, but two goals by Damien Fleury within the first three minutes of the second period put France ahead.

Sweden came level on 35 minutes thanks to Nashville forward Filip Forsberg who added another goal early into the final period for a lead in the tournament’s scorers’ rankings with eight goals.

Arizona defenceman Oliver Ekman-Larsson then rounded off the score on 44 minutes.

In Group B, played in the eastern Czech city of Ostrava, Nashville goalie Pekka Rinne made history after conceding a goal following 238 minutes of keeping a clean sheet.

Joonas Donskoi levelled the score on 52 minutes and Teemu Hartikainen put Finland ahead a minute later, but Alexei Kalyuzhny made it 2-2 half a minute from the end as Belarus had pulled their goalie.

Finland converted all three penalties in the shootout, against one for Belarus, with the game winner scored by Donskoi.

In Group B’s other game, Slovenia, already relegated from the worlds, recorded their first victory after edging Denmark 1-0 with a 10th-minute goal by Ziga Pance.