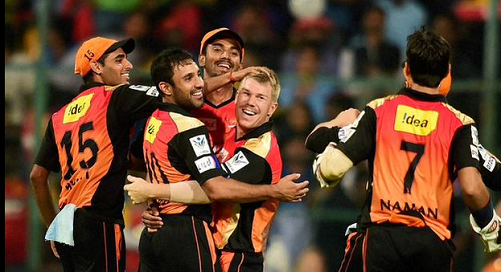 SRH skipper David Warner muscled his way to a blazing 81 from 52 balls as he yet again shouldered the responsibility of scoring runs, leading the hosts to a very challenging 185 for five after electing to bat.

Punjab needed 28 from the last over but Miller managed to score only 22 with three sixes and a four off Ishant Sharma. Miller hit nine sixes and two fours in his sensational knock.

The pitch was good for batting and Warner put on 56 runs for the first wicket with Shikhar Dhawan (24) and added 65 for the second with fellow Australian Moises Henriques (28).

Warner cleared the ropes five times and hit the boundary ropes six times before being dismissed in the 18th over. He was in glorious touch as the Australian left-hander pulled, cut and drove ferociously, scoring boundary after boundary, and snatched the Orange Cap from Ajinkya Rahane.

Punjab managed a good start through Murali Vijay (24) and Manan Vohra (20) but spinner Bipul Sharma scalped both the openers to peg back the visitors, who ended at 180 for 7.

SRH are now placed third in the table with two matches — Bangalore (May 15) andÂ Mumbai IndiansÂ (May 17) — to go.

Vijay looked in good touch when he creamed off 16 runs from Trent Boult’s first over but Bipul (2/13) cut short his stay. The left-arm spinner flighted the ball well outside the off stump, Vijay’s drive failed to connect and Dhawan took a smart low catch in short covers.

Vohra tried to hoick Bipul’s tossed-up delivery but found Bhuvaneshwar at the long-on. Boult returned and got rid of Glenn Maxwell (11) with a peach of delivery that bounced, kissed the shoulder of the bat and flew to Naman Ojha’s hands.

Young Lokesh Rahul pulled up a stunner off Henriques to send back Wriddhinman Saha (5) to leave Punjab gasping at 65 for four. David Miller and skipper Geroge Bailey were left with a daunting task of scoring 124 runs with an asking rate of almost 11 an over.

The home bowlers though kept tightening their grip over the match with tidy bowling and regular strikes. Henriques was the most successful bowler, giving away just 16 runs and taking three wickets in his four overs.

At the start, Dhawan too played some delectable shots as Hyderabad sprinted to 51 in just 4.2 overs. Paceman Anureet Singh stemmed the rot a bit by giving away just three runs in the last Power-play over.

Glenn Maxwell brought some smile by having Dhawan stumped in the very first ball he bowled. The burly Henriques, Hyderabad’s hero in the last game againstÂ Delhi Daredevils, was promoted up the order as he joined Warner at the crease.

The spin trio of Gurkeerat Singh, Axar Patel and Maxwell though put a brake on the scoring rate.

Left-arm paceman Hendricks, who had conceded 18 runs in his first over, was brought back but he still leaked 13 runs as SRH reached 86 for one after 10 overs.

Warner brought his fifty and team’s hundred with a flat off-side six off Patel and lifted the left-arm spinner for another six over long on three balls later.

Gurkeerat was given the same treatment by Warner but the spinner got rid of Henriques. Eoin Morgan joined his skipper and the left-handed Briton got down to business straightaway, hitting Maxwell for two sixes and a four.

Morgan, though, did not last long. He was scalped by Hendricks, thanks to a stunning catch in the deep by Manan Vohra. SRH quickly lost Warner, who chipped one from Hendricks to Gurkeerat at mid-wicket, and Naman Ojha in consecutive balls. Ojha was run out.