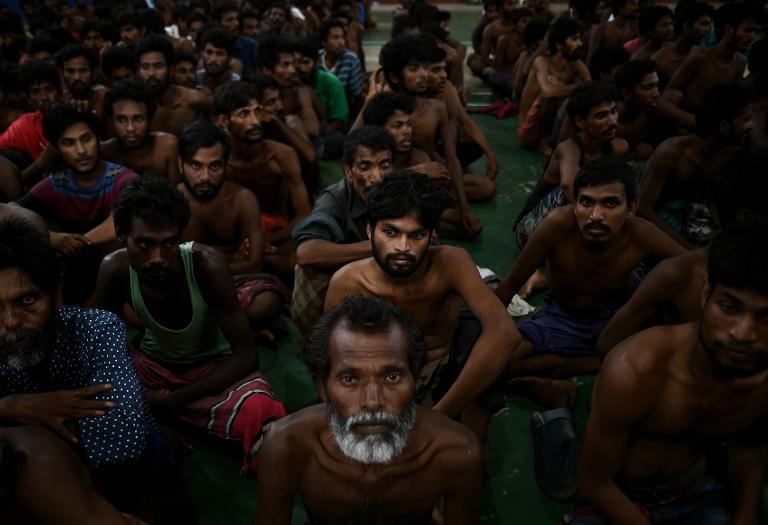 Thousands of migrants believed to be stranded at sea without food and water could die unless Southeast Asian governments act urgently to rescue them, migrant groups and the UN warned Tuesday.

Underscoring the concern, a migrant organisation said a vessel was adrift somewhere near the Thai or Malaysian coast with around 350 people — including women and children — but no food or water, while Thailand called a regional summit on the issue.

Indonesia’s navy, however, said earlier it had turned away one boat carrying hundreds of migrants from Myanmar and Bangladesh, whose fate remains uncertain.

Dhaka, meanwhile, detained a trawler after it was cast adrift with 116 Malaysia-bound illegal migrants on board.

Nearly 2,000 boatpeople from the two impoverished nations — many of them members of Myanmar’s oppressed Rohingya minority — have swum ashore, been rescued or intercepted off Malaysia and Indonesia in recent days.

Many of them were thin, weak or in poor health after weeks at sea.

The Arakan Project, a group advocating for the rights of Muslim Rohingya says as many as 8,000 other people may be adrift.

The group said it had spoken by phone with passengers aboard the vessel carrying 350 people, who said they were abandoned by their Thai human-traffickers.

“They told us they have had no food and water for the last three days. They have called for urgent rescue,” said Chris Lewa, the group’s founder.

Ali Hussein, a 31-year-old Rohingya from Myanmar, is among more than 1,000 people who swam ashore in Malaysia from their smuggling ships Sunday and Monday.

Like thousands from the Rohingya community, he said he was “running for my life” from sectarian violence in Buddhist-majority Myanmar.

He and about 800 other people endured 43 days on an overcrowded vessel bound for Thailand as meagre food and water supplies dwindled to nothing.

The ship diverted to Malaysia’s Langkawi island where the hungry passengers leapt into the sea in a desperate swim to safety.

“There was no more food or water so we just jumped out of the boat,” he said.

Rohingya survivors of the route have previously told AFP of harrowing sea passages in which passengers died of hunger or sickness or were beaten to death by smugglers, their bodies tossed overboard.

People-smugglers are believed to be dumping their human cargoes after being diverted from Thailand — a key stop on illicit migration routes — where authorities have cracked down on the trade.

“It needs a regional effort… we donâ€™t have the capacity to search for them, but governments do. They have boats and satellites,” said Joe Lowry, a Bangkok-based spokesman for the IOM, a 157-member-state intergovernmental organisation.

He told AFP those still at sea may be in a “very bad condition or even dead” soon.

On Tuesday, it said it would host a summit on May 29 to address “the unprecedented increase” in trafficking.

In Europe, governments have already been forced to look at concerted action with more than 1,800 people drowning this year alone in sinkings of boats run by migrant smugglers in the Mediterranean.

The ship was given fuel and towed out to international waters, he said.

“We are not forcing them to go to Malaysia or Australia. That is not our business. Our business is they don’t enter Indonesia because Indonesia is not the destination,” he said.

Bangladesh’s coast guard on Tuesday said it had detained a trawler which appeared to be from Myanmar with 116 illegal migrants on board and which was cast adrift when its crew abandoned it.

The United Nations refugee agency UNHCR says 25,000 people are believed to have embarked on the Southeast Asian route from January to March, double the previous year, and that an estimated 300 had died.

Vivian Tan, spokeswoman for the UNHCR in Bangkok, said traffickers may now be unwilling to land in Thailand and are holding people “captive” at sea or abandoning them.

“There’s definitely a need for countries in the region to come together to see how best to (address the problem),” she said.

But the IOM’s deputy chief of mission in Indonesia Steven Hamilton said any regional effort to find stricken vessels would be daunting.

“Those waters are dense with other boats. Youâ€™re really not sure what you’re looking for.”