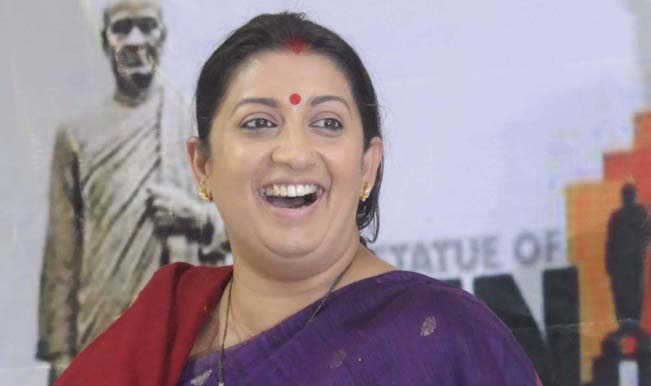 She declared this at Gandhiâ€™s constituency, where she is at a one-day tour designed to underscore that he has not visited Amethi in over three months.

“The MP of Amethi (Rahul Gandhi) has been missing from here,” the 39-year-old minister said, who is pointedly doing what Gandhi has been doing in the rest of the country ever since he returned from a two-month sabbatical – offering solace to farmers whose crops have been destroyed by unseasonal rain.

When asked if she had strategically planned her visit six days before Rahul Gandhi comes to Amethi, Irani said, “Rahul Gandhi’s timing is suspect, not mine.”
While, Rahul Gandhi, who was in ParliamentÂ on TuesdayÂ said, “I hope she (Smriti Irani) gets the food park back.”

Gandhi and the Congress have accused the government of “revenge politics” by cancelling a massive food processing plant that had been sanctioned for Amethi by the previous UPA government. The “food park” was expected to create thousands of jobs and bring investment to under-developed Amethi, the Congress has said.

Also, Gandhi dramatically professed in Parliament that the government has “murdered” existing laws to acquire land from farmers.

He accompanied his comments with dramatic gestures including a blow to the neck as he referred to “deadly strikes” against farmers. He also repeated the phrase he coined last month in parliament – “suit-boot ki Sarkar” – to censure the government for working for the elite and warned that if farmers are “robbed”, his party will take to the streets to protest.

“We took two years to bring the land bill, but the NDA government has murdered it in just a few days,” the 44-year-old said.

Detailing his review, he said the government cannot be excused for exempting projects in categories like defence from needing the consent of 80% of the affected landowners. Â