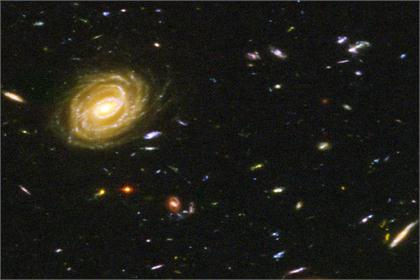 Washington: Globular clusters, dazzling agglomerations of up to a million ancient stars, are among the oldest objects in the universe. Though plentiful in and around many galaxies, newborn examples are vanishingly rare, and the conditions necessary to create new ones have never been detected, until now.

Astronomers using the Atacama Large Millimeter/submillimeter Array (ALMA) have discovered what may be the first known example of a globular cluster about to be born: an incredibly massive, extremely dense, yet star-free cloud of molecular gas.

Lead author Kelsey Johnson at the University of Virginia said that they may be witnessing one of the most ancient and extreme modes of star formation in the universe, adding this remarkable object looks like it was plucked straight out of the very early universe. To discover something that has all the characteristics of a globular cluster, yet has not begun making stars, is like finding a dinosaur egg that’s about to hatch.

This object, which the astronomers playfully refer to as the “Firecracker,” is located approximately 50 million light-years away from Earth nestled inside a famous pair of interacting galaxies (NGC 4038 and NGC 4039), which are collectively known as the Antennae galaxies. The tidal forces generated by their ongoing merger are triggering star formation on a colossal scale, much of it occurring inside dense clusters.

What makes the Firecracker unique, however, is its extraordinary mass, comparatively small size, and apparent lack of stars.

All other globular cluster analogues astronomers have observed to date are already brimming with stars. The heat and radiation from these stars have therefore altered the surrounding environment considerably, erasing any evidence of its colder, quieter beginnings.