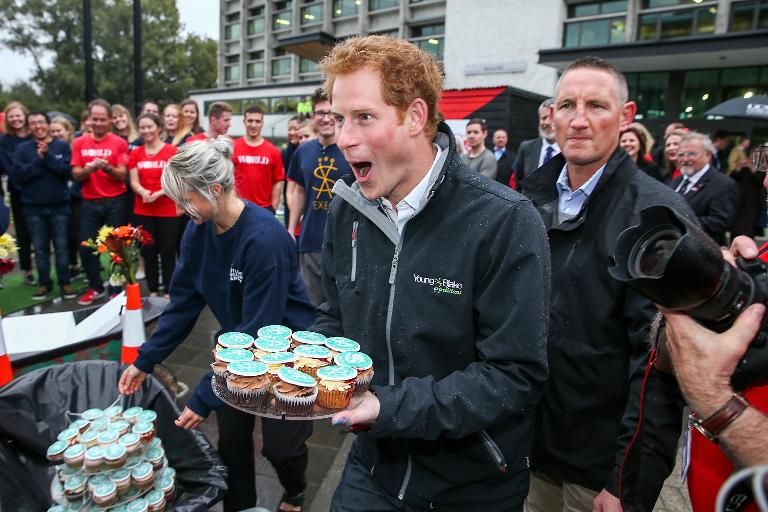 Britain’s Prince Harry handed out cupcakes and advice on ginger pride in New Zealand’s second largest city Christchurch on Tuesday where he was reunited with a former matron he had not seen in years.

The fifth in line to the throne was in the South Island city to see reconstruction efforts following a devastating 2011 earthquake but he also enjoyed some relaxed banter with the crowd.

After saying on Monday that he was ready to settle down and have children, the 30-year-old received plenty of female attention, including an invitation to a prom and a marriage proposal from a woman carrying a placard saying “Harry Me”.

As he dispensed cupcakes to drenched fans following a downpour at Canterbury University, student Hannah Frauenstein cheekily asked for a bouquet he was holding in one hand.

“He was the first boy to give me flowers — it’s love,” she told reporters.

The red-haired prince make a beeline for six-year-old Riley Harris, who was displaying a sign saying “Keep calm, ginger is the spice of life”.

“He just told Riley that gingers are cool and to be proud and never let anyone hassle you about it and to put the sign above his bed,” Riley’s mother Mel said.

He also received a surprise when he spotted Vicky McBratney in the crowd, a former matron from Britain’s exclusive Ludgrove School he used to attend and now a pre-school teacher in Christchurch.

“He just looked really shocked and said ‘Hi Vicky, nice to see you’, gave me a kiss and had a chat,” she said after giving him photographs of his schooldays.

“(He was) a loveable, friendly, nice boy. He’s still got that same smile.”

The prince also met emergency workers, who received awards after the 2011 quake that killed 185 people, and took a tram through rebuilt areas of the city with Prime Minister John Key.

He visited the headquarters of the Student Volunteer Army, which formed after the quake to distribute supplies and help residents clear debris.

He praised their work, saying “community always comes first”, and said their organisation had the potential to be replicated around the world.