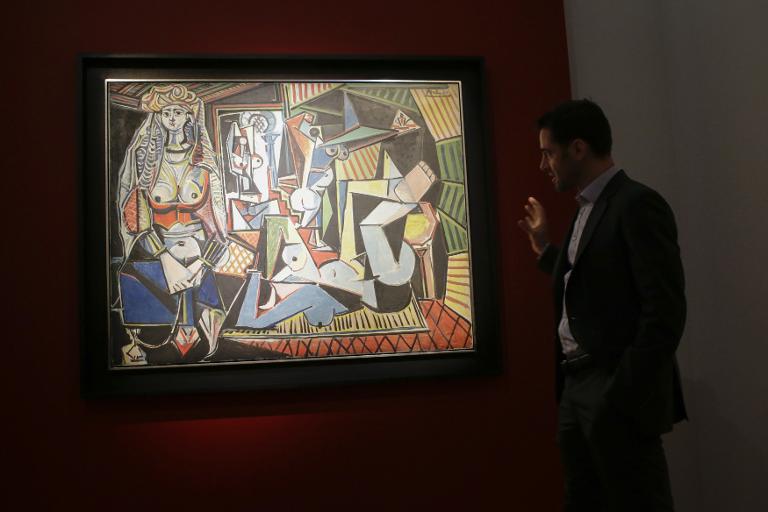 A Picasso masterpiece and a Giacometti statue are tipped to smash world records in New York Monday for most expensive art sold at auction in what has been dubbed “sale of the century.”

“The Women of Algiers (Version 0),” which depicts a colorful scene from a harem, has been valued at $140 million by Christie’s. A standard premium, in this case 12 percent, will be added to the hammer price.

The current world record for a painting sold at auction is $142.4 million, set for British painter Francis Bacon’s “Three Studies of Lucian Freud,” which was sold by Christie’s in New York in 2013.

The rival highlight of Monday’s evening sale is a bronze statue by Alberto Giacometti called “Man Pointing,” estimated to be worth $130 million, which also carries the same 12 percent premium.

“Those two works can set a world record,” Loic Gouzer, senior vice president of Christie’s, said ahead of Monday’s auction which gets under way at 7pm (2300 GMT).

“You don’t have another chance to get them,” Gouzer added.

Swiss sculptor Giacometti already holds the record for most expensive sculpture sold at auction with his “Walking Man I” fetching $104.3 million in London in 2010.

Monday’s sale sees auction house Christie’s offer 35 lots spanning more than a century from 1902 to 2011, and expected to fetch in excess of $500 million at its swanky New York premises at Rockefeller Plaza.

Exponential growth in the art market, particularly for modern and contemporary works, is attributed to a growing number of private investors around the world and burgeoning interest in Asia and the Gulf.

Thierry Ehrmann, CEO of Artprice, told AFP that interest is particularly strong for the Giacometti statue, which it believed could go as high as $175 to $200 million and eclipse the Picasso.

“This will be the sale of the century,” said Ehrmann. “It’s a tipping point in the history of art.”

There are only six casts in the world of “Man Pointing,” which shows a wiry, nearly six-foot (1.8-meter) man holding up one hand and pointing with the other.

The 1955 painting by Pablo Picasso is one of the last major paintings by the Spanish master still in private hands. He painted several versions until he settled on the nearly four-by-five-foot canvas.

New York’s spring auction season began last week at Sotheby’s which sold a Vincent Van Gogh painting for more than $66 million, the most paid for a work by the Dutch post-impressionist since 1998.

Van Gogh’s “Les Alyscamps,” which depicts a stand of autumnal trees, had been expected to go for around $40 million but was finally snapped up by an Asian collector after an intense bidding war.

The sales continue on Tuesday, Wednesday and Thursday.

But even if auction records are broken Monday, the Picasso and Giacometti are unlikely to eclipse the $300 million reportedly paid privately by Qatar for Paul Gauguin’s 1892 painting “When Will You Marry?” in February.