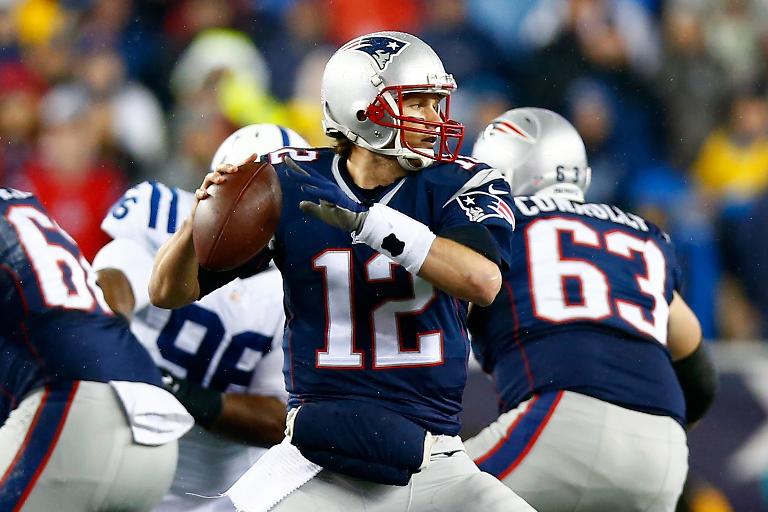 Tom Brady was suspended for four games and the New England Patriots were fined $1 million on Monday as the NFL came down heavy on its marquee player and its Super Bowl champ over the “Deflategate” scandal.

The National Football League not only suspended the two-time NFL MVP without pay but also stripped the Patriots of both their 2016 first round draft pick and the 2017 fourth round draft pick for deflating footballs in a key AFC playoff contest.

The idea is that a deflated and thus softer football is easier for a quarterback to handle and pass.

“There is substantial and credible evidence to conclude that you were at least generally aware of the actions of the Patriots’ employees involved in the deflation of the footballs and that it was unlikely that their actions were done without your knowledge,” NFL executive vice-president Troy Vincent said of Brady.

“Despite our conviction that there was no tampering with footballs, it was our intention to accept any discipline levied by the league. Today’s punishment, however, far exceeded any reasonable expectation,” said Kraft. “It was based on circumstantial rather than hard or conclusive evidence.”

The 37-year-old Brady will miss the Patriots’ first four games of the 2015 regular season, meaning that if the suspension isn’t shortened, he would return to the field against his accusers in week six when the Patriots face the Indianapolis Colts.

The punishment was announced five days after the release of the Wells report which discovered there was “more probable than not” that two Patriots employees had conspired to deflate balls in the team’s AFC Championship game against the Colts, which they won 45-7.

That probe also found that Brady — who went on to lead the Patriots to a Super Bowl victory over the Seattle Seahawks — was “at least generally aware of the inappropriate activities” of the two employees, locker room attendant Jim McNally and equipment assistant John Jastremski.

“The discipline is ridiculous and has no legitimate basis,” Yee said. “This outcome was pre-determined.”

He said four-time Super Bowl winner Brady would exercise his right to launch an appeal to commissioner Roger Goodell within three days.

The fine equals the largest ever dished out by the NFL back when they went after San Francisco 49ers owner Ed DeBartolo Jr. after he pleaded guilty for his role in a Louisiana gambling fiasco in 1999.

The league came down hard on the Patriots, but singled out Brady for specific punishment saying he not only tarnished the league’s image but refused to cooperate with investigators.

The league said Brady — who is arguably the biggest star in American football – declined to turn over his cell phone, texts, and emails to help with the probe, “despite being offered extraordinary safeguards by the investigators to protect unrelated personal information.”

The reaction from NFL players on social media was swift with many of his teammates saying it was unfair, including New England running back LeGarrette Blount.

“This is absolutely ridiculous!!! SMH #PATSNATION Stand up!!!!!,” Blount wrote on Twitter.

“You have to love the patriots . They do anything to win a Super Bowl . #mytypeofteam,” Dockett said.

Arizona Cardinals linebacker Sean Weatherspoon said this was no slap on the wrist.

“I think the suspension is warranted, they came down hard on the organization though. #Deflategate,” he wrote.

Brady will miss the season opener against the Pittsburgh Steelers, followed by a Sunday contest against the Buffalo Bills and then games against the Jacksonville Jaguars and Dallas Cowboys.

His replacement at quarterback would be Jimmy Garoppolo, who has thrown just 27 passes in the NFL to date.

Patriots coach Bill Belichick was exonerated of any wrongdoing in the cheating scandal.

“The report identified no evidence of wrongdoing or knowledge of wrongdoing on the part of any member of the coaching staff, including Head Coach Bill Belichick,” Vincent said.

The league also said Monday that it believes this is not the first time the Patriots have been guilty of deflating footballs to try to give Brady a competitive advantage.

“The evidence suggests that January 18th was not the first and only occasion when this occurred, particularly in light of the evidence referring to deflation of footballs going back to before the beginning of the 2014 season,” Vincent wrote in a letter to the Patriots.