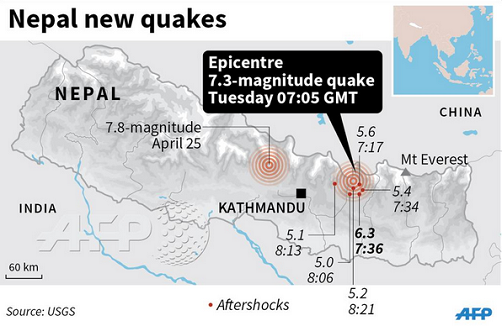 New Delhi: Multiple earthquakes measuring 7.3, 6.9, 7.3 and 4.8 on the Richter scale rocked Nepal and several parts of India on Tuesday morning, with a 6.9 earthquake jolting Afghanistan.

The largest of the four quakes that shook Nepal was measured at 7.3 on the Richter Scale; its epicentre was between Kathmandu and Mount Everest, according to the US Geological Survey.

The epicentre was around 40 miles west of Namche Bazar, a remote area near the China border.

Tremors were felt across major swathes of North India, Uttar Pradesh, Bihar and West Bengal and stretched as far south as South Mumbai and New Delhi, at about 12.40 pm on Tuesday.

Prime Minister Narendra Modi held a meeting with top officials to review the situation. Home Minister Rajnath Singh said that emergency relief teams are on standby. “India is ready to provide all the support which Nepal would require,” the minister told reporters.

Metro services in the Indian national capital and in Kolkata were halted to avoid any loss of lives.

People rushed out of their homes and offices in cities like Patna in Bihar and Gurgaon near Delhi.

Like April’s earthquake, Tuesday’s was shallow – 10 km deep. Shallow quakes are more deadly because the amount of energy released is focused over a smaller area.

People in Kathmandu rushed outdoors, reporters said. There were no immediate reports of damage to buildings. Shopkeepers closed their shops.

Nepal Police issued an advisory wherein it has asked people to stay in open fields, help them make free roads and asked people not to make phone calls, requesting civilians to use SMSs instead.

Kathmandu’s Tribhuvan International Airport, the main entry point for flights bringing in international aid since the April quake, was closed anew Tuesday as a precaution.

Initial reports suggest that four people have died in Chautala, Nepal. The NDRF said only one person has been killed till now because of the earthquake.

Kathmandu was devastated just weeks ago by aÂ  massive earthquake in which nearly 7,000 people were killed. Tremors were also felt across Northern India at the time, with nearly 50 people killed in Bihar.