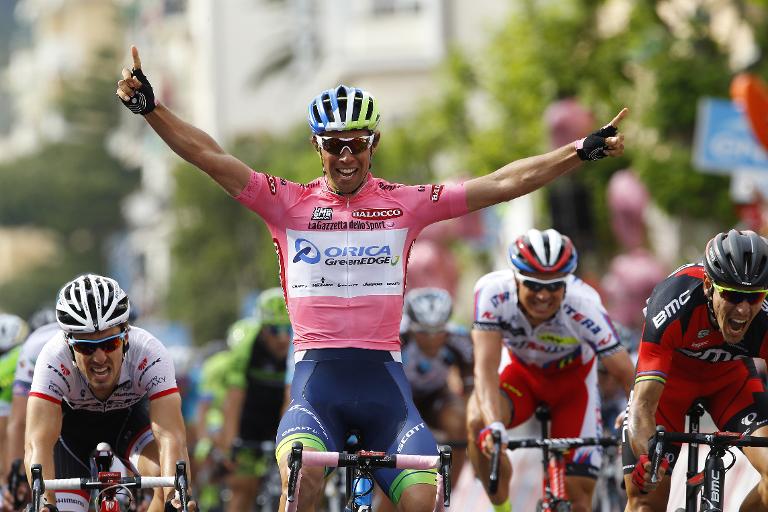 Australia’s Michael Matthews burst from the pack to win a bunch sprint to claim Monday’s third stage of the Giro d’Italia and consolidate his lead atop the overall standings.

Matthews picked up a 10-second time bonus for the stage win to stretch his overall lead, which he took possession of on Sunday after he finished seventh on stage two.

“What more can you ask for?” Matthews said after the race. “I’m racing with the pink jersey on my back and at the end I win the stage.

“After the Team Time Trial win, today was another big target for us. We reconned the stage last week so we knew what to expect, and we pulled it off.”

The Orica rider edged Italy’s Fabio Felline into second, with Belgian Philippe Gilbert third, after the hilly 136km ride which was marked by a dramatic fall by Italy’s Domenico Pozzovivo.

The AG2R team leader and climb specialist fell face-first on a fast downhill section 38km from the finish.

With memories still fresh of the death four years ago in the same region of Belgium’s Wouter Weylandt, race doctor Giovanni Tredici quickly allayed the worst fears of observers, who had noted a pool of blood beneath the stricken rider’s head, saying Pozzovivo’s life was not in danger.

But it was the kind of fall that sends shivers down the spine.

“I was really afraid,” said Pozzovivo’s teammate Hubert Dupont, who was first to the scene.

“His eyes were rolling and it seemed such a long time before medical assistance arrived.”

Pozzovivo, fifth overall on the 2014 Giro, never lost consciousness but was stretchered away and taken to San Martino hospital in Genoa by helicopter due to the poor road network in the area.

“The tests carried out at the hospital show that he is in a stable condition,” said Tredici, adding that he had a “relatively modest head trauma” and insisting that his fall could not be compared with that suffered by Weylandt in 2011.

However, Pozzovivo’s team described the injury as a “serious trauma to the head and face” and added that the rider had “deep cuts above his right eye which require stitches.”

AG2R will continue without him for the remainder of the race.

The stage got off to a lively start as Giro favourite Alberto Contador and his Tinkoff team kept close tabs on a breakaway group of 25 who led by more than a minute on the pink jersey group on the last climb.

Contador will have been happy to keep a low profile and control the race from a short distance away just three days into this three-week Tour.

A lone survivor of that escape, Russia’s Pavel Kochetkov, crossed the final summit alone and set off on a breakneck downhill charge.

But he was caught by three counter-attackers with 10km to race and even this was helpless as the peloton took advantage of the last seven flat kilometres to reel them in 3km from the line.

Pink jersey wearer Matthews was in a comfortable position the whole race, and the 24-year-old Australian had just enough gas in the tank to pip the field after a long, drawn out race for the line.

“We did very well to get two guys into the breakaway,” said Matthews.

“The stage was quite hard, and I tried to get to the foot of the final climb near the front so that I could drift back to save some energy. Simon Gerrans worked very hard to position me for the sprint.”