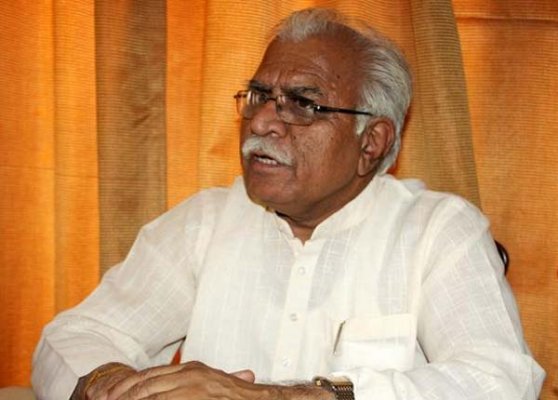 Khattar was addressing the passing out parade of recruit basic coarse batch no. 79 and 80 at Recruitment Training Center (RTC) Bhondsi in district Gurgaon.

As many as 994 recruit constables joined their ranks in Haryana Police and the chief minister took salute of the march-past. The chief minister honored the recruits who excelled during the training.

In his address the chief minister said that soon separate Haryana Police Rules will be enacted as presently the Haryana police is functioning as per Punjab Police Rules, 1934.

He said that Yoga will be made part of training of the police constables for keeping them physical and mentally fit. At the same time, the chief minister mentioned the â€˜Vyayamashallyenâ€™ proposed to be set up in villages and said that police department should help in making these operational.

He directed the police to behave in friendly manner with the general public saying that it will help in making the state free from the drug menace and corruption.

Khattae reiterated that women police stations will be opened in all districts of the state by Rakshabandan festival, for which 500 women constables will be recruited.

He said that police recruitments would be made on the basis on Transparent Recruitment Policy (TRP). At the same time, he said that in the next three years 3060 new house will be constructed for police personnel at a cost of Rs. 550 crore.

He said that during the same duration police-public schools will be opened in all the districts of the state. He pointed out that after BJP government came into power in Haryana three such schools have been opened in Sonepat, Bhiwani and Panchkula, taking the number of such schools to 11 where about 9000 children were receiving quality education.

He said that police personnel will be provided 500 additional motorcycles so as to reduce the number of causalities in road accidents, adding that a Road Safety Fund will also be created for improving traffic management system. 50% of the amount collected by police from traffic rule violators will be deposited into this fund and it will utilized for curtailing the road accidents.

The Chief Minister felt concerned about the earthquake victims and said that one battalion of IRB will be trained in disaster management. This battalion will be then sent to help the victims of natural calamity within the state and also in other parts of the country.

Khattar said that besides the forensic Science Laboratory in Madhuban, two Regional FSL were being set up at Bhondsi and Sunaria.

Earlier, while welcoming the Chief Minister Director General of Police Yashpal Singhal revealed that a cyber crime lab has been set up at Madhuban which is first in North India and 6th in the country where the trainees were taught to handle cyber crime cases.