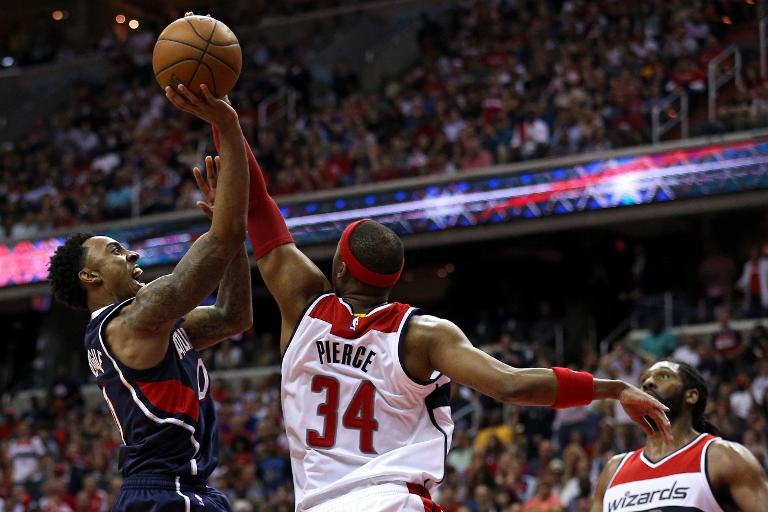 Guard Jeff Teague scored 26 points as the Atlanta Hawks held off the Washington Wizards for a 106-101 win in game four of their Eastern Conference semifinal series.

Forward Paul Millsap scored 19 points and centre Al Horford had 18 points and 10 rebounds for Atlanta, who rebounded from a buzzer-beating loss in game three to level the series at 2-2.

Washington, who were playing their third consecutive game without injured star John Wall, got to within three points 104-101 in the final seconds but couldn’t engineer another buzzer-beating miracle.

Forward Paul Pierce missed a wide-open shot from beyond the arc with seven seconds remaining. Pierce hit the game winner in game three.

Millsap sank two free throws for the final points with less than one second remaining to seal the victory.

Wizards coach Randy Wittman called the timeout with 9.5 seconds left and the Wizards down by three. Nene Hilario provided a screen at the top of the key on Hawks forward DeMarre Carroll, and Pierce darted to the right and got open but his shot bounced off the rim.

“The open one is always the hardest one to make,” said Wizards guard Bradley Beal, who scored a playoff career-high 34 points.

Dennis Schroder added 14 points and eight assists off the bench for top-seeded Atlanta, which finished with 30 assists on 41 baskets.

“Their guards broke us down too much,” Wittman said.

The Hawks outscored Washington 32-16 in the paint and shot 59.1 percent in the first half to compile a 10-point lead at the break.

“That’s how we play,” Millsap said of the points in the paint disparity. “We attack.”