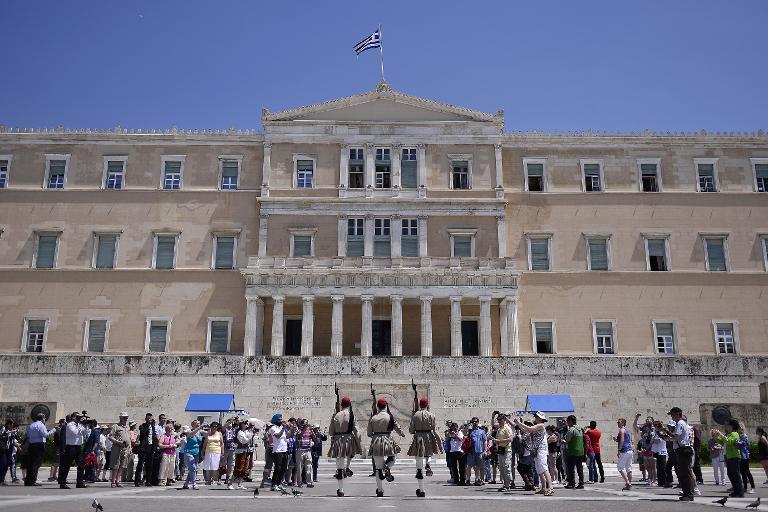 Greece narrowly averted a default Tuesday that could have seen it crashing out of the euro, but warned it faced another cash crunch within two weeks without a bailout deal with its EU financiers.

Athens’s radical new government managed to scrape enough cash together Monday to place the order for the repayment of 750 million euros ($840 million) of IMF loans, the finance ministry said, pledging to honour both its international and domestic debt obligations.

Greece won some support in the latest round of debt talks as it battles to keep itself solvent, but eurozone finance ministers demanded more key reforms before they agree to release the final 7.2-billion-euro tranche of its EU-IMF bailout.

“We welcomed the progress that has been achieved so far… At the same time, we acknowledged that more time and effort are needed to bridge the gaps on the remaining open issues,” a Eurogroup statement said after the meeting in Brussels.

But Greek Finance Minister Yanis Varoufakis — leading the charge for the anti-austerity government of Prime Minister Alexis Tsipras — admitted Athens faced an imminent crisis as it struggles to keep up repayments on its 240-billion-euro bailout.

“The liquidity issue is a terribly urgent issue. It’s common knowledge, let’s not beat around the bush,” said the shaven-headed former economics professor, who has been at loggerheads with his international counterparts.

Athens has been squeezing funds from the central and local governments to be able to meet its payments, but mayors are beginning to resist.

World stock markets fell in response to the news, with Asian shares dropping at the open after Wall Street snapped a two-day rally, while the euro was trading at $1.1162 in Tokyo from $1.1208 on Friday.

Led by Germany, the Europeans still expect a rigorous regime of reforms from Athens including cuts to pensions, but Tsipras’s leftist government in power since January has so far refused to deliver on the terms of the bailout.

Eurogroup chief Jeroen Dijsselbloem insisted that a full deal was needed for Greece to get its remaining bailout funds, but raised the possibility of breaking up the reform programme into steps and then making staggered disbursements.

But the eurozone needed “more detailed proposals” from Greece, the Dutchman said, adding there was “a lot of work behind the scenes in Athens that needs to be done.”

EU economic affairs commissioner Pierre Moscovici said that on issues like pensions and the labour market, Greece had to make “alternative proposals for areas of programme that it rejects.”

Varoufakis said he hoped for a deal in coming days.

Meanwhile Germany raised the issue of a possible referendum, a prospect already mooted by the Greeks.

“Maybe this would be the right measure to let the Greek people decide if it is ready to accept what is necessary,” powerful finance minister Wolfgang Schaeuble said.

While Varoufakis said the idea was “not on our radar at the moment,” it revives a pledge made by Tspiras at the end of April that, if Greece’s financers push his government to a deal that contravenes their election promises, it would be put to a public vote.

Greece was hoping that the symbolic statement of progress won from the eurozone Monday will help persuade the ECB to keep emergency funds flowing to Greece’s fragile banks.

“The statement is a clear sign that the process is ongoing, and that’s something,” a European official involved in the talks said on condition of anonymity. “But will it be enough for the ECB? I don’t know.”