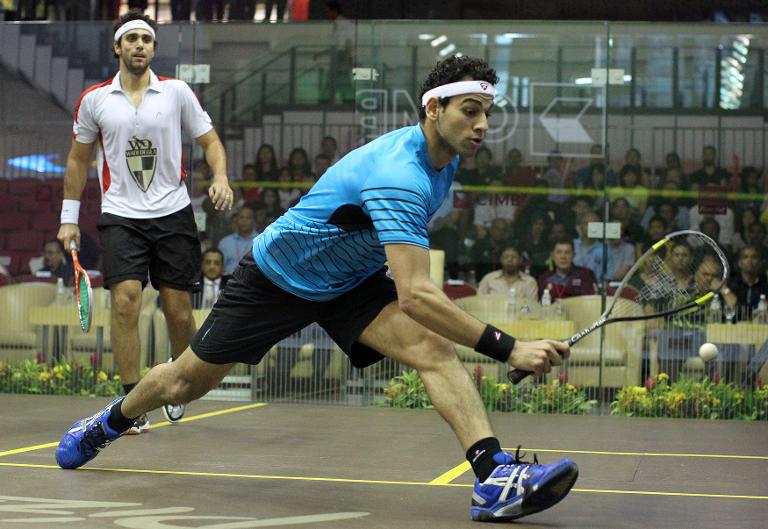 Mohamed El Shorbagy served up a warning that he intends to achieve the last of his three main goals this season by winning the British Open for the first time.

El Shorbagy felt it was scary because he had been given a freakishly awkward start against an opponent of exceptional calibre, as a result of Willstrop having fallen outside the seeding positions during a recovery from a hip injury.

“I got a shock when I saw that draw,” El Shorbagy admitted, “It was scary and I had to completely alter my preparations. I had to be prepared for a final in round one.

“But I feel like I dealt with it okay. I set myself the goals this season of becoming world number one, becoming world champion, and winning the British Open.

“I’ve achieved one and not the other (becoming world champion) so I really want this, and I feel I’m playing well enough to do it.”

Indeed El Shorbagy played solidly enough now to be considered the unofficial favourite as well as the top seed.

Previously many had considered that to be either Ramy Ashour, the world champion who withdrew with an Achilles injury, or Nick Matthew, the three times former British Open champion who is trying to play through an enduring ankle injury.

The 34-year-old Matthew had been hoping to become the oldest player ever to win the British Open, but now cast doubt on his ability to achieve that after an uncharacteristically staccato performance during a 6-11, 11-4, 11-9, 11-9 win over Laurens Jan Anjema, the former top-10 player from the Netherlands.

Matthew has been sidelined for a month, and looked match-rusty as he lost eight of the first nine points, only getting back into the match by forsaking his normal patient, accurate style, and taking risks to win points quickly.

“I wasn’t fit to play a day or two ago, but I decided just to try and see what I could do,” Matthew said. “If it was a tournament on the other side of the world I wouldn’t be playing.

“Here I’m just an hour from my home, and so it’s worth seeing what I can do. I am not looking to win the tournament anymore, rather just to see how well I can do. I have 48 hours to recover so you never know what I can do.”

El Shorbagy next plays Borja Golan, the former top-10 player from Spain, while Matthew faces Gregoire Marche, a member of the French team which a week ago won the European team title for the first time.

He was followed into the second round by his compatriot Mathieu Castagnet who suggested he too has been given a bounce from the European success as he got past the sixth-seeded Peter Barker.

Castagnet may well have been helped by the Englishman’s knee injury which worsened and caused his retirement after he lost the first two games 12-10, 11-2.

Castagnet now has a chance of going at least to the quarter-finals and, with Matthew, who is in his quarter, apparently struggling, perhaps further than that.

It also looks as though the man now most capable of denying El Shorbagy the title is another member of France’s triumphant team, Gregory Gaultier, the reigning champion.

The second-seeded titleholder from Aix-en-Provence begins the defence of the British Open title on Tuesday against Nafizwan Adnan, a qualifier from Malaysia.