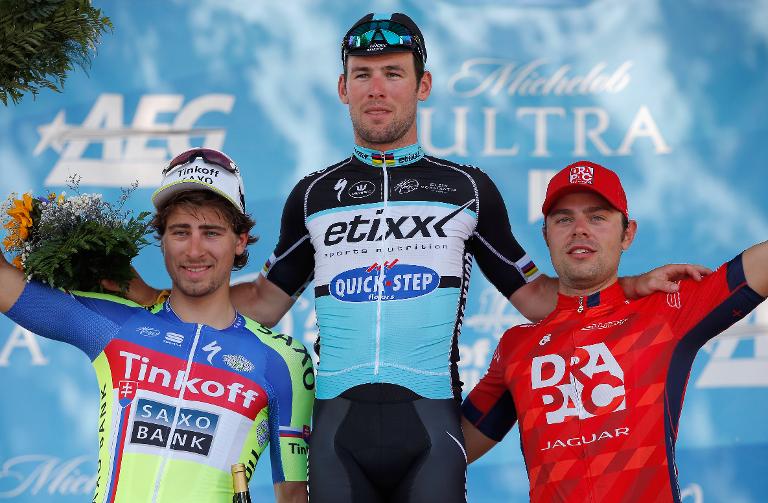 Mark Cavendish won his second straight stage by once again beating out Peter Sagan in a sprint to the finish during the second stage of the Tour of California.

The race was marred by a huge crash with 10 kilometres (six miles) to go. It sent Ben Jacques-Maynes to the hospital with a dislocated shoulder and cuts on his face. The American has started in every Tour of California which is celebrating its 10th anniversary this year.

Cavendish (Etixx) had to work much harder to hold off Sagan (Tinkoff-Saxo) in Monday’s sprint finish than he did in the first stage on when the same pair finished 1-2 on Sunday.

“He came underneath me in the last corner, and it was perfect,” said Cavendish, who finished the 193-kilometre stage in four hours, 47 minutes and two seconds.

“With the pressure he’s under he would hit out early, so I was happy to come off his wheel.

“He actually did a good job of boxing me in so I had to really start the sprint late.”

Cavendish extended his overall race lead to eight seconds over Sagan. Breakaway rider Robin Carpenter (Hincapie Racing) moved into third thanks to his three time bonuses on the stage.

The key stages for the overall are expected to be the stage six, 24-kilometre time trial at Big Bear Lake and a gruelling climb to the Mount Baldy finish line the next day.