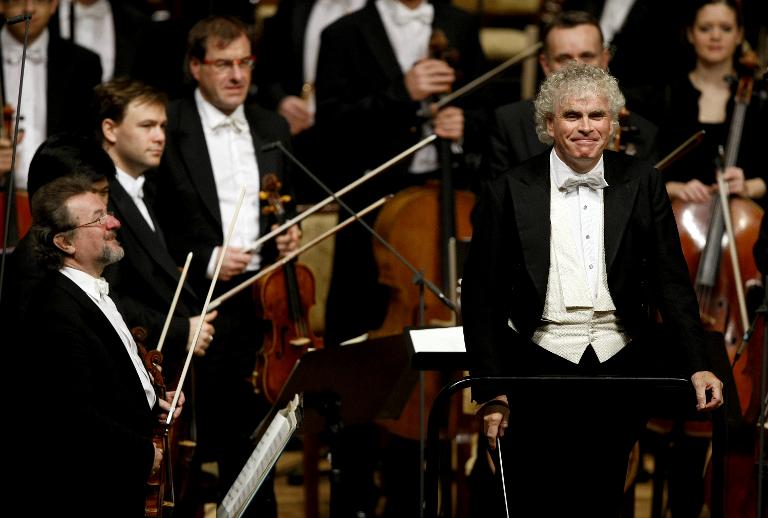 The Berlin Philharmonic’s members cloistered themselves for hours in a church building Monday to elect their next chief conductor, one of the most prestigious jobs in classical music.

The orchestra’s 124 permanent musicians, who have been sworn to absolute secrecy and had to leave their mobile phones and any recording devices outside, were to democratically choose their next maestro to replace Britain’s Sir Simon Rattle in 2018.

The global community of classical music aficionados has been abuzz for weeks about who will take up the baton and assume the title of artistic director in Berlin — the mystery heightened by the fact that “every living conductor” is a potential candidate.

After initially keeping the location of the ballot secret, the Philharmonic asked journalists to meet at 1200 GMT at the Protestant Jesus Christ Church in Berlin’s leafy southwest to await the announcement, warning them to prepare for “possibly a long wait”.

News of an appointment was then delayed twice, until at least the early evening, as the musicians huddled inside the red-brick church, a space which the orchestra has repeatedly used for performances and recordings since World War II.

Among the names being talked about have been Berlin native Christian Thielemann, 56, now at the Staatskapelle Dresden, who favours German composers Richard Wagner, Johannes Brahms and Richard Strauss and is said to command a strong following in the orchestra.

Other oft-mentioned names are Latvian Andris Nelsons, 37, who heads the Boston and Birmingham symphony orchestras, and curly-haired Venezuelan Gustavo Dudamel, 34, who is nicknamed “the Dude” and now conducts the Los Angeles Philharmonic.

Another strong contender has been the musical director of the Berlin State Opera, Argentine-born Israeli Daniel Barenboim, 72, although he recently said he is not a candidate.

The Berlin Philharmonic — founded in 1882 and seen by many as the best orchestra in the world — is unique in that its musicians chose their chief conductor themselves, in a conclave vote often likened to a papal election, minus the white smoke.

Everywhere else it is boards and trustees, or sometimes politicians, who decide.

In the secret vote, the orchestra’s members were to first propose a list of candidates, then discuss them and vote to create a shortlist, followed by rounds of voting until one candidate emerges with a “clear majority”.

The exact number of votes cast for each candidate will be kept secret, however.

Once a candidate is picked, a member of the voting committee calls the person to offer him or her the job. Should the person refuse, the orchestra would reconvene to discuss how to proceed.

The vote would normally have been held in the Philharmonie in central Berlin. But a special ceremonial concert is being given in the building Tuesday to mark 50 years of diplomatic relations between Germany and Israel, forcing unusually tight security measures.

Rattle, who has led the “Berliner Philharmoniker” since 2002, will take over as chief conductor of the London Symphony Orchestra in 2017.

He will spend the year after that commuting to London from Berlin — where he lives with his third wife, mezzo soprano Magdalena Kozena, and their young family — before finally handing over the Berlin baton.

The 60-year-old Liverpudlian, with his characteristic mop of white hair, said recently that Berlin was “simultaneously the hardest and best conducting job in the world.”

With still three more years to go in the German capital, he said his time in its iconic concert hall, the Philharmonie, has been “exceptional”.

The Berlin Philharmonic tours tirelessly and has recently pioneered the online streaming of its concerts via its ground-breaking Digital Concert Hall.

It has one of the world’s most prolific recording contracts and a massive back catalogue, a reference for classical music aficionados worldwide.